Here we are at John O' Groats. 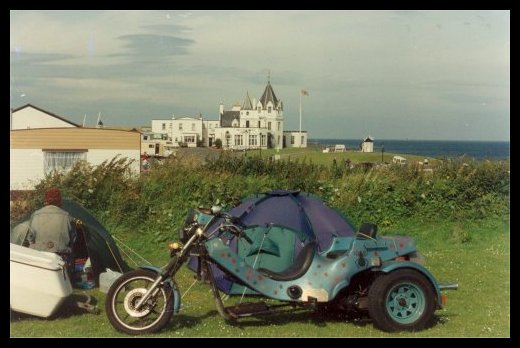 It hasn't always been tiger coloured.  When I built it in around 1990 it was sort of orange coloured.  Then it became green and black, then black, then blue, then blue with multi coloured spiders, and finally tiger coloured ( around 1998 ).  The original plan was a quick five week build, then sell it on.  Oh dear, that didn't go to plan now did it.  In 2003 the gearbox failed - this prompted me to do a bit of cosmetic work whilst I was at it.  Take a nose HERE, for the full details. 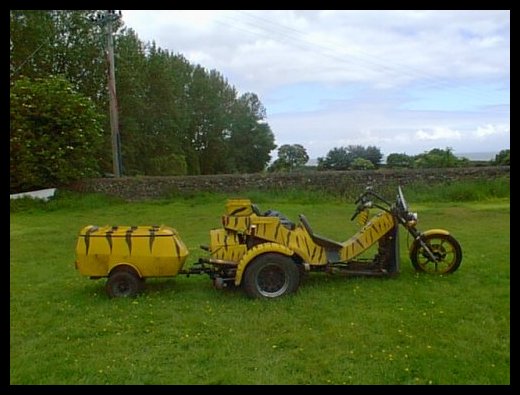 My trailer, which was bought for pulling behind my Gold Wing, took on a few tiger stripes in order to match the trike.  Funnily enough it also ended up colour matched with multi coloured spiders too - in fact it's been painted to match a few vehicles of mine, but for now it stays paired up with the TCT. 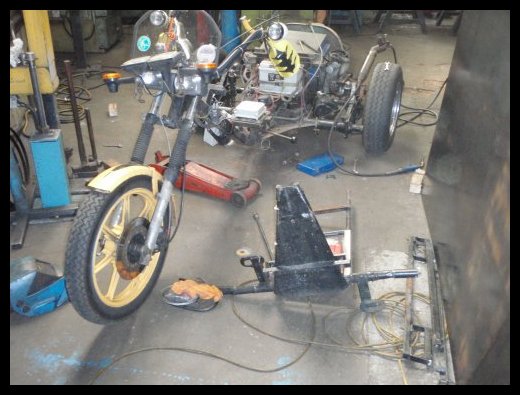 Oh dear - it's now 2009 and the TCT gets cut in half.  Why ?  When I built it the engine was sloping back too much.  Why I never changed this back in 2003 when I did the gearbox is beyond me.  Much cussing and welding later, and the TCT rolled back out of the workshop with the engine sitting almost level.  The footrests and mudguards had to be changed to suit, and a pair of new seats were also fitted. 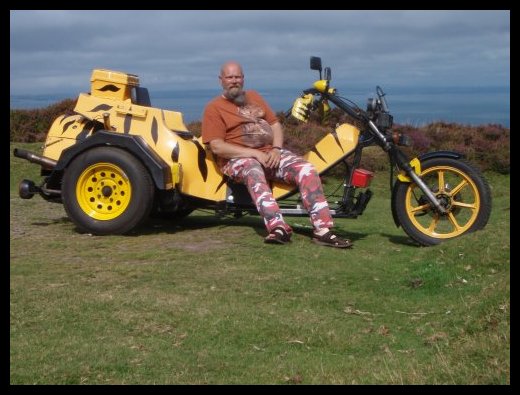 Just for good measure I powder coated the wheels and fitted new tyres.  This is how the TCT looks as of 2009 - seen here down at Porlock, a place I seem to spend quite a few weekends at. 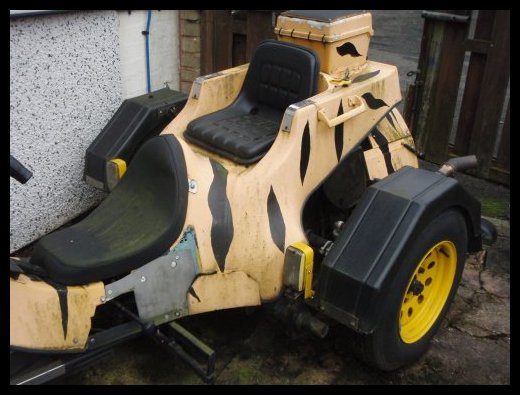 Well, we are now over halfway through 2012 and the TCT is sat under the kitchen window currently on SORN.  I did put it on the road for a year when the wheel spindle in DOT failed in September 2010, but that was more out of necessity than anything else.  I just can't get my foot up onto the clutch quick enough, and should I have to brake suddenly, I don't think I could react in time.  Sadly, the TCT has grown a green coating of algae and mould - also due to not being used, the oil seal behind the flywheel has dried out and started leaking.  Looks like my first job when ( if ) they sort this leg out will be to take the engine out and change that oil seal

April 2013 - following my hip replacement I feel I now have enough movement in the left leg to consider using the TCT again.  The first thing was to give it a good scrubbing to get all the moss and algae off it.  MOT followed, and in true Sod's Law fashion the horn didn't work.  Luckily the MOT tester "lent" me one for the test, and as soon as I got home I fitted one that worked.  I did have a bit of a roadside breakdown - a slug of silicone sealant got wedged in the fuel line ( strangely enough the same thing happened back in February 2000 ).  As I thought, the engine had to come out and a new crank oil seal fitted. 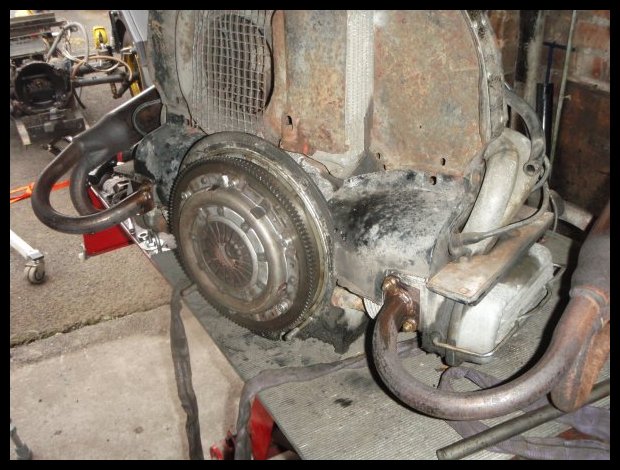 The TCT's next trick was turning the lights off every two or three minutes - not much fun if you are riding at night.  This turned out to be a faulty 16 amp trip unit - there again, these trips were not new when I fitted 'em in the first place.

The TCT was called into service to tow the "Dog Kennel" again this year - which it did with no problem.  Come to think of it, most of the little niggles I've had with the TCT this year are a result of it being left standing.

The TCT has had a bit more use this year.  It's been down to Porlock twice and over to Belgium once, and it's only September now.  Mechanically it hasn't given much trouble.  I did have a slight air leak on the left hand bank of cylinders - this was due to the rubber inlet manifold connector being perished.  Nothing that a few quid and an hour's work couldn't fix. 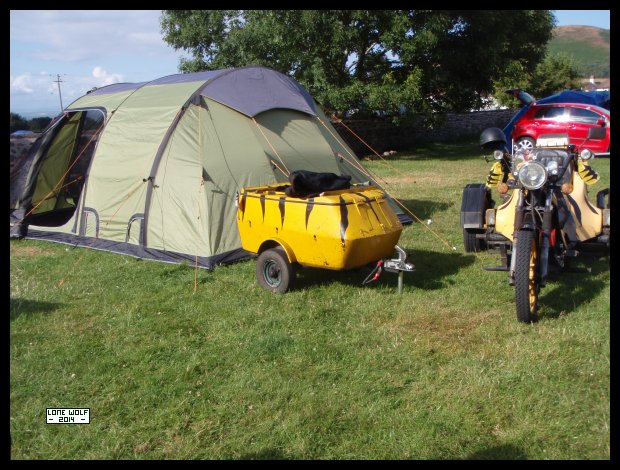 The TCT has been over to Belgium once again.   The spare front wheel which I had powder coated back in 2009 finally got fitted.  Apart from some new stainless steel rocker covers and a new fuel gauge, the TCT hasn't had much money spent on it. 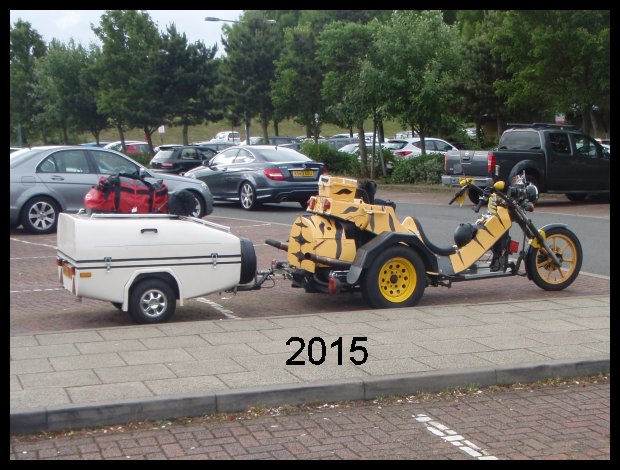 Once again the TCT headed over to Belgium - and ran faultlessly there and back.  Seen below, towing my new Raclet Solena trailer tent . . which the TCT towed without any problem. 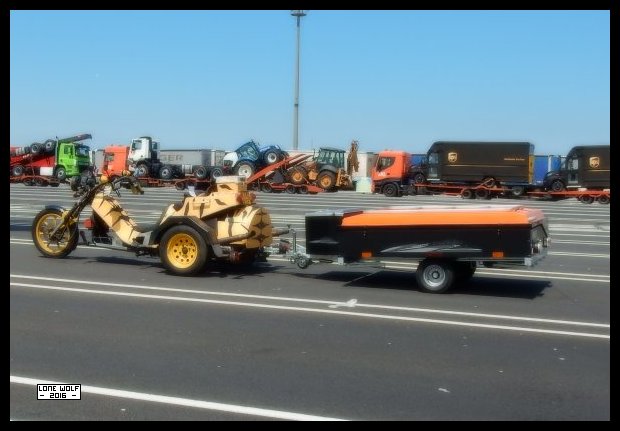 I treated the TCT to a volt meter . . .cost less than two quid from good old eBay. 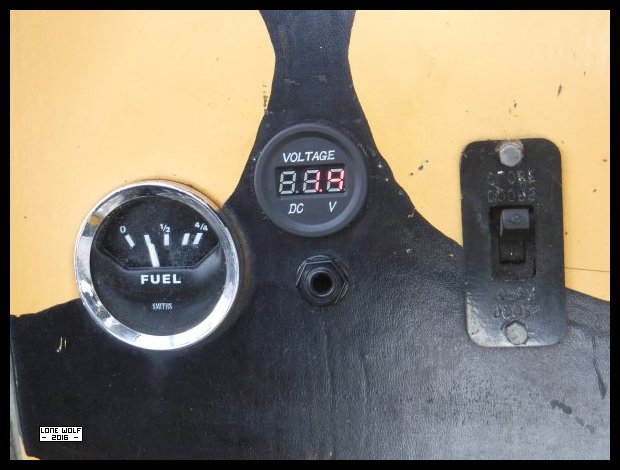 The TCT has been running without any problems - once again it towed the trailer tent over to Belgium without any hassle. . . seen below lurking in Poperinge. 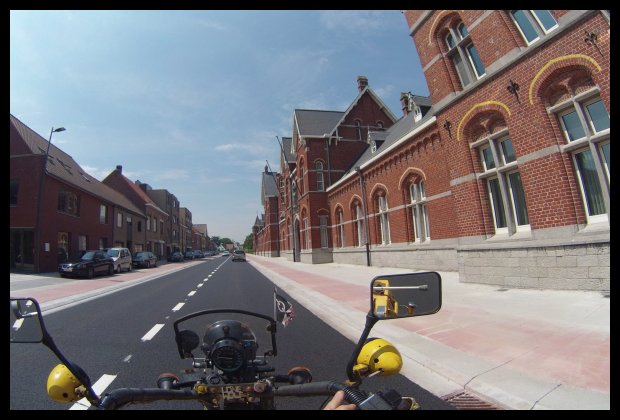 Yet again the TCT performed faultlessly - so to show my appreciation I treated it to some new stainless steel handlebars and a new rev counter. 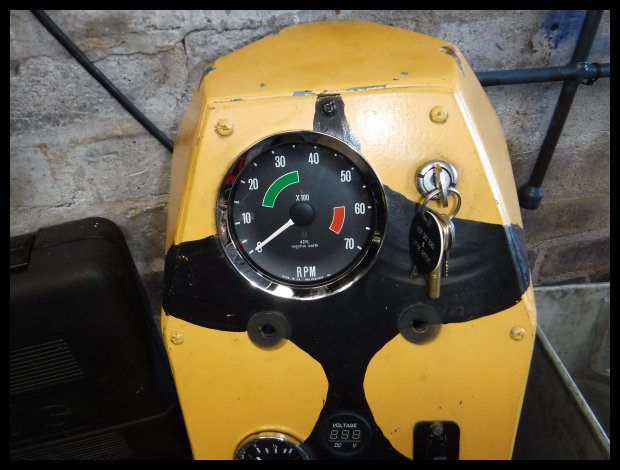 It had to happen sooner or later - the TCT let me down.  I was heading up to Yorkshire, but only got 18 miles up the A38 when the engine died.  To cut a long story short, I got recovered back home by the AA - found it was the coil which had in turn caused the electronic ignition to fail.  I swapped for a dizzy with a set of points and did my Yorkshire run three days later with no real issues.  The carburettor also gave me a bit of bother later in the year, and to be honest, that still ain't set up the way I'd like it. 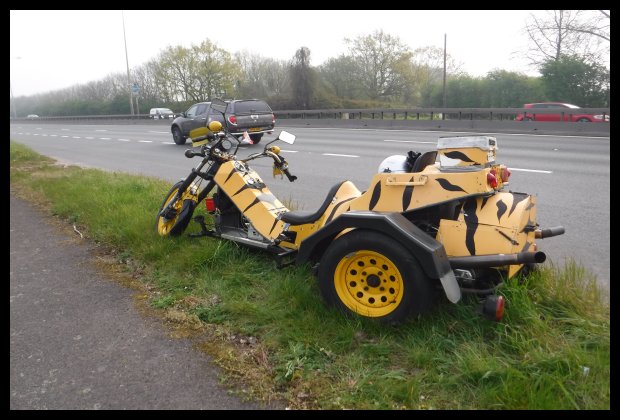 Let's wait here until the recovery wagon arrives shall we ?