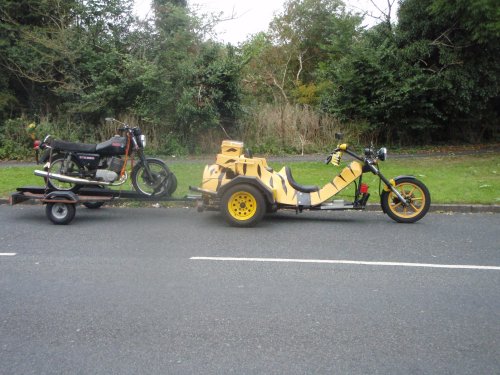 Now you may, or may not know, that I owned one of these before - it was back in April 2009 to be exact.  A wonderful machine which I thoroughly enjoyed riding.  So why did I get rid of it ?

Now why would I go and buy a bike I can't change gear on ?  If all goes to plan, I hope to make a cable operated hand change for the ETZ, working similar to the system used on scooters. 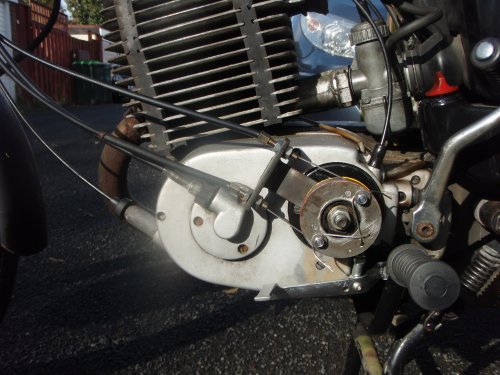 As you can see, the ETZ now has a cable operated hand gear change.  I'm still waiting for the log book so that I can take the bike for MOT.  I know you don't need the log book for an MOT but the bike does not  have a number plate and I don't know the registration number - so until the bike has a number plate, this is as far as I can go.

Idea number one was to make a left hand twist grip which would rotate similar to the throttle, and by means of two cables, operate the gear lever.  Very much like the system used successfully on scooters for a few years now.  First of all I obtained a "push - pull" twist grip and modified it so that a clutch lever and all the switch gear could be mounted on it.  A one inch diameter tube fitted over the existing ETZ handlebars and rotated freely.  The clutch lever and the switch housings were both machined out to fit one inch handlebars. 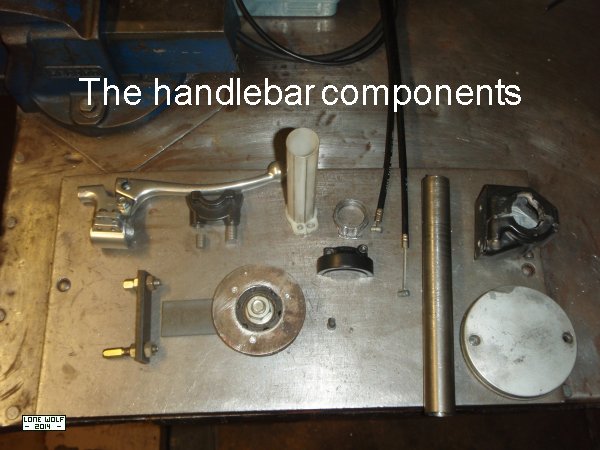 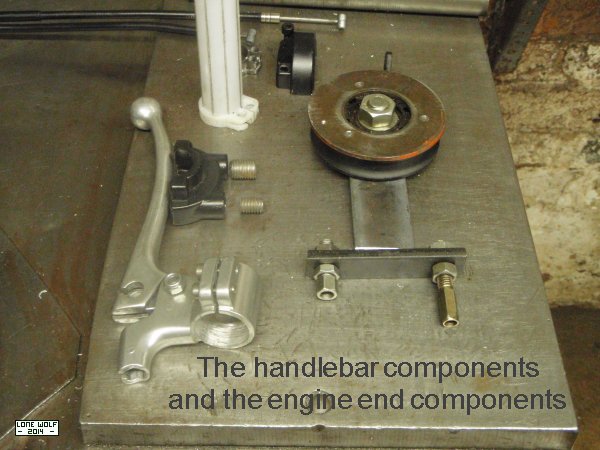 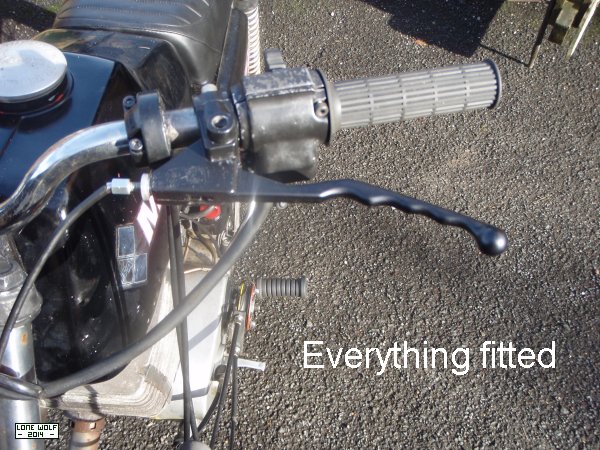 For the engine end of things, I thought some kind of wheel which would be turned by the two cables, and in turn would operate the gear lever.  Now being a lift engineer, I just happened to have an old door hanger roller which seemed to fit the bill.  Just about the right size and it already had a bearing in the centre.  A couple of rose joints and a length of 6mm threaded rod and the job was done. 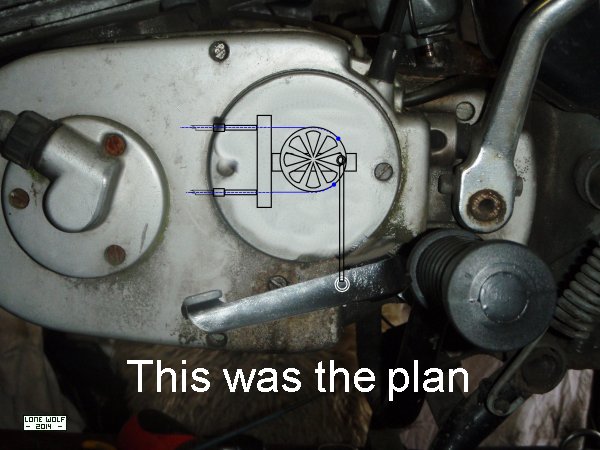 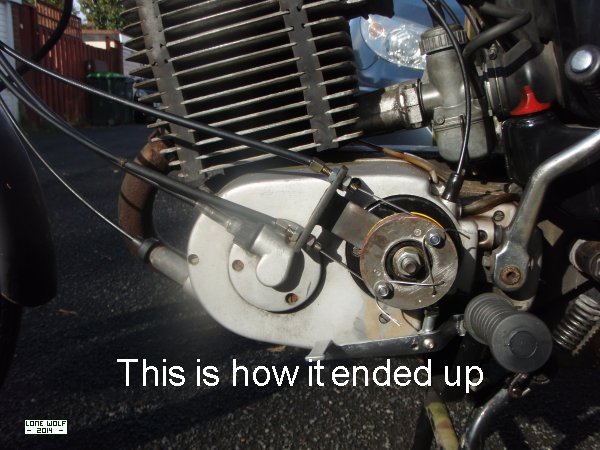 Yes and no.  Yes - in as much as when you twisted the twist grip it would indeed change up and down the box.   No - as in the amount of movement needed at the handlebar end was excessive, but if you altered the ratio of twist grip movement to gear lever movement to give less "twist", then it was physically too hard to operate.  This needed a bit more thought.

Now if my hand can't do the job, then maybe my right foot can.  Plan "B" was to make some kind of cross over shaft and operate the gear lever from the other side.  Now I noticed the ETZ carries the centre stand on a nice, useful looking tube - just the sort of tube needed for a cross over shaft. 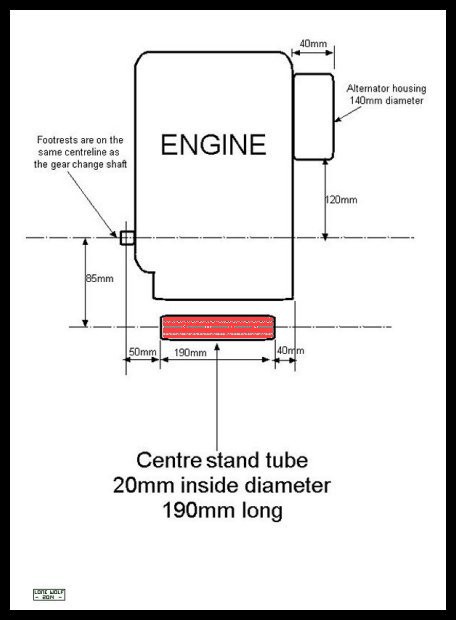 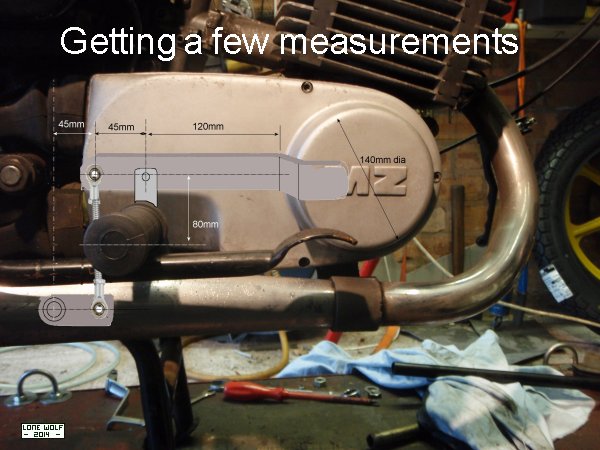 This idea was fine until it came to other side of the engine.  There was no practical way of avoiding the centre stand return spring, and it was difficult to get around the shape of the engine.

Well if the shaft won't fit underneath, what about above ?  There seemed to be enough room for a shaft to pass beneath the carburettor.  As for mounting it - I already had a hole in the oil pump cover so that could be used to support the shaft on the left hand side of the engine - I can worry about the other side later. 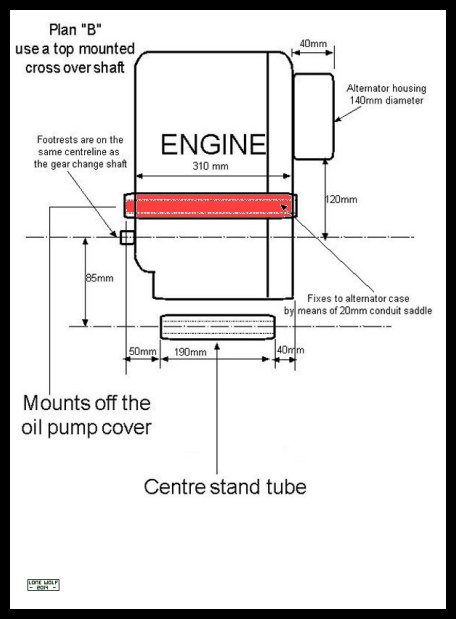 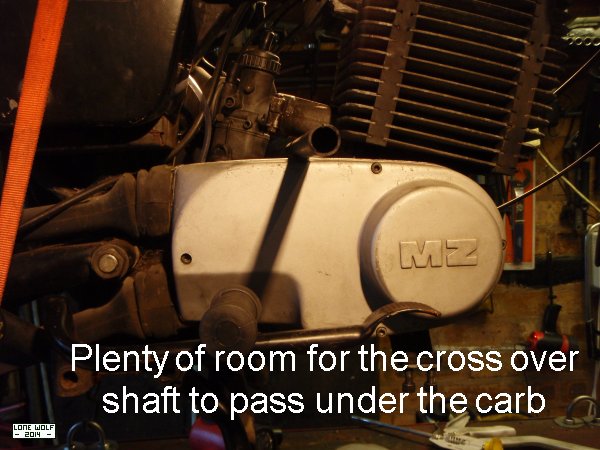 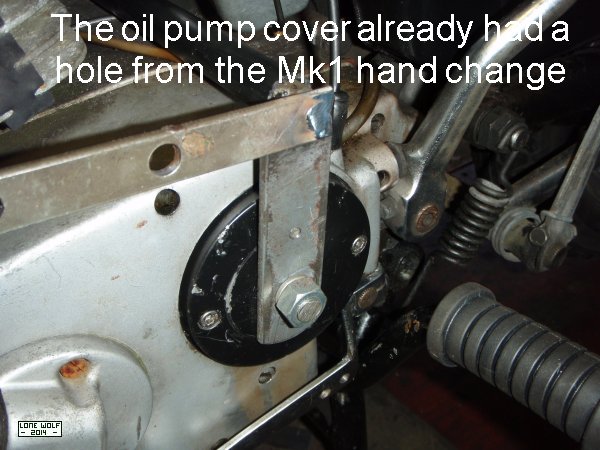 Whilst looking around for something totally unrelated to this job I picked up an old plastic conduit saddle - that looks just the thing for mounting the cross over shaft on the right hand side of the engine.  I knew a plastic saddle would melt, but I also knew I had some steel ones somewhere.  I placed the saddle where it needed to be fixed and marked the holes - in another twist of good fortune the holes could not have been better placed if you had designed it that way - one hole either side of the strengthening web of the alternator cover. 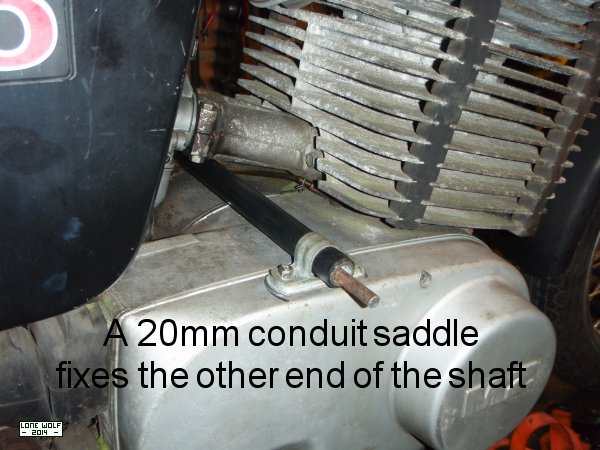 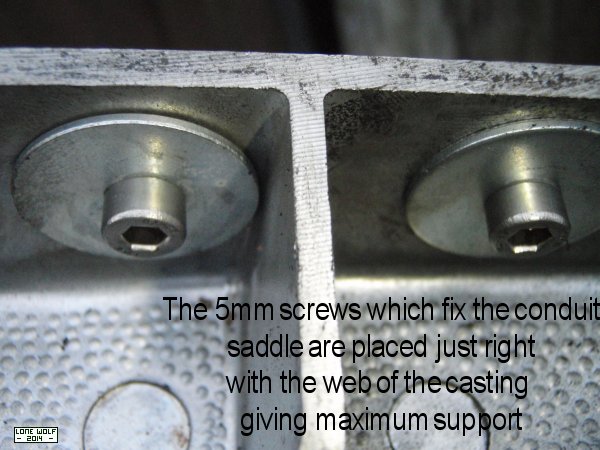 Right - that's the cross over shaft fitted.  Time to make a couple of brass bushes for it to run on, then weld the operating arm to the left hand end of the shaft.  The right hand gear lever which fits on the other end must be removable otherwise there's no way to fit it unless you remove the carburettor to allow the shaft to pass beneath.  Anyway - all the bits were now ready to fit. 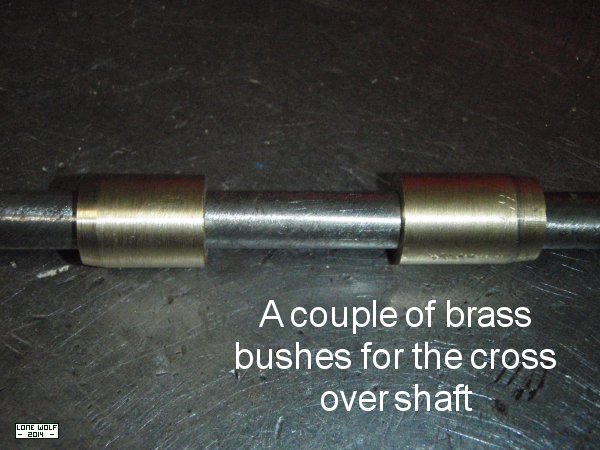 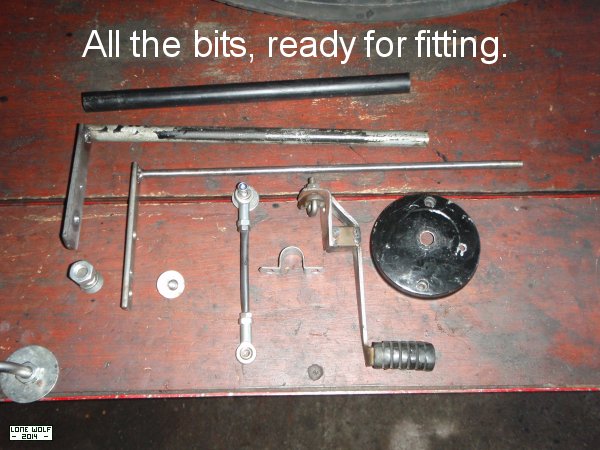 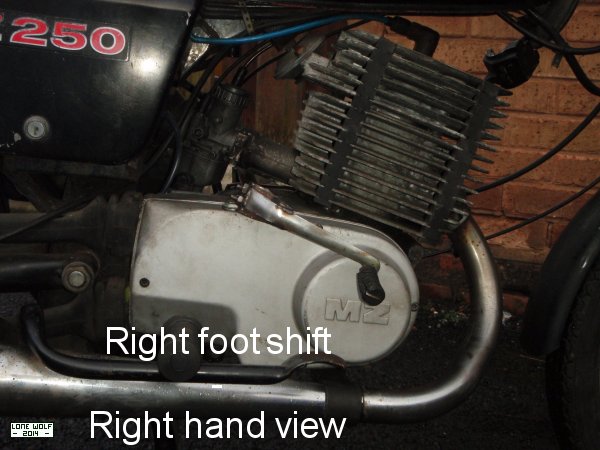 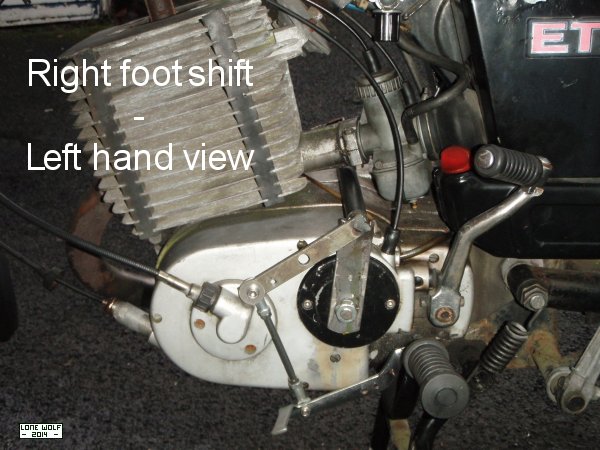 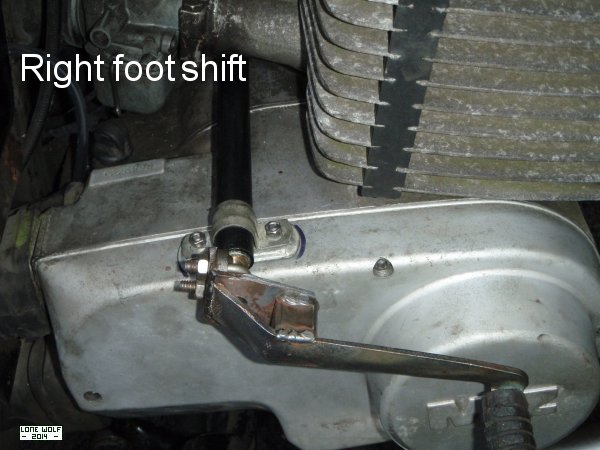 So far, yes it does, but the bike isn't actually on the road yet, so I can't really say how successful this conversion has been.  As soon as I get the log book sorted out, and the bike insured, taxed and MOT'd, then I'll updated this page and let you know.

January 21st, 2014 and I rode the bike all of six miles over to the MOT tester . . . it passed.  Did have a problem on the way back, but that was due to a dirty fuel tank.  So far the right foot shift is working well.  The clutch is dragging a bit so finding neutral from a standstill is tricky, but I expect the clutch will free up a bit once the bike gets a bit more use, I mean, it had been standing for a good few years.  As soon as I get some tax on it, I'll take it for a proper shakedown run.

Not being the kind of person who sits around waiting - it's now January 23rd, 2014 and the MZ is taxed.  The first fifty miles went without major breakdowns - nothing that removing the petrol tank and giving it a good cleanout didn't fix.  I've done a bit more minor fettling on the gear change linkage and filled the gearbox with fresh oil.  As soon as we get a fairly mild and dry day I'll take the bike out for another decent long run. 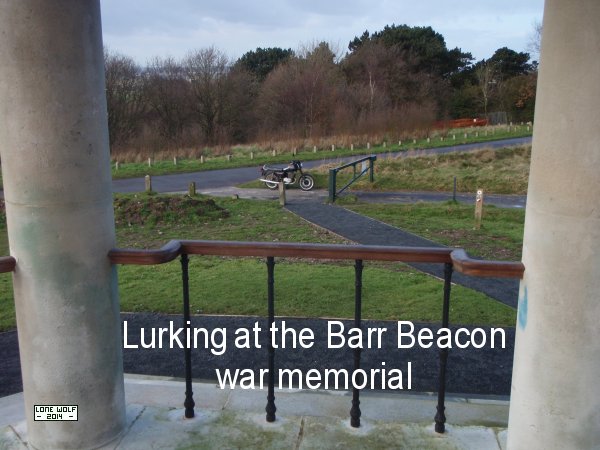 Nothing really exciting has happened regarding the MZ.  I put petrol in and ride it - everything seems to work just like it should.  I suppose I aught to have a go at making the bike look a little prettier, but that's something for the future. 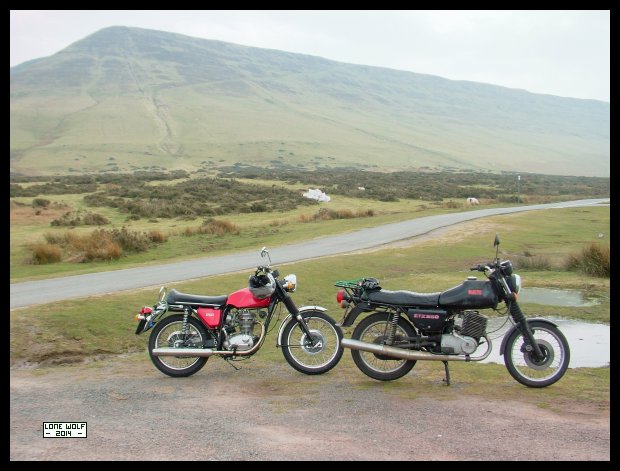 Here we see the MZ at the summit of Gospel Pass.

I must confess that for the first nine months of the year the MZ sat in the garage with no MOT.   When I did dig the bike out, it started first time and sailed through the MOT with no problems.  On the way home the engine faltered at a set of lights, then continued to run but sounded rough, as though the head gasket was blowing.  I also noticed my rev counter had stopped working.  I kept the engine running, then as the lights changed and I let out the clutch . . . . the bike went backwards.   Two strokes - you've got to love 'em.

I treated the MZ to a new Mikuni VM30 carburettor - this seems to have made the bike run even better. 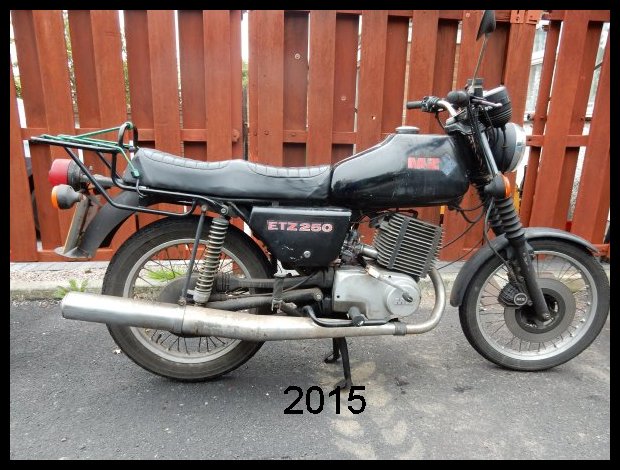 Below is the MZ at Foxfield Railway's "Iron Curtain" day.  The bike ran fine but cut out when I got home.  A quick look revealed the nylon heel on the contact breaker points had worn away and was not allowing the points to open.  I ordered a new set of points, which, when I came to fit them wouldn't even open enough to set the timing correctly.  I measured the heel on the new points, it was almost one millimetre shorter than the worn set.  To cut a long story short, I treated the MZ to a Power Dynamo electronic ignition - which means no more contact breaker worries. 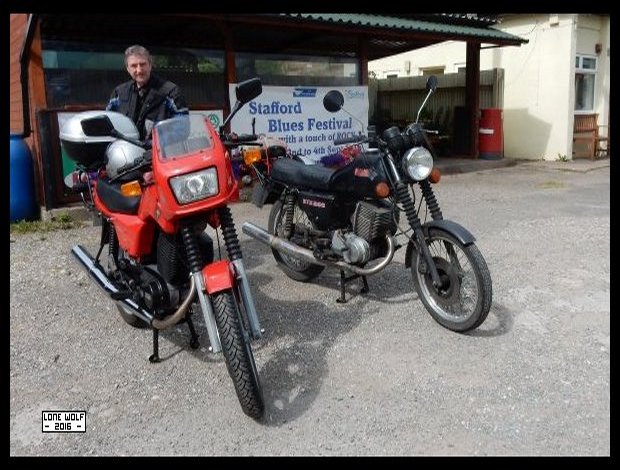 The MZ has just gone about its business without any fuss or bother.  I suppose I should really make a start on improving its looks - but that's something for the future.  In the meantime I'll just carry on riding and enjoying East Germany's finest. 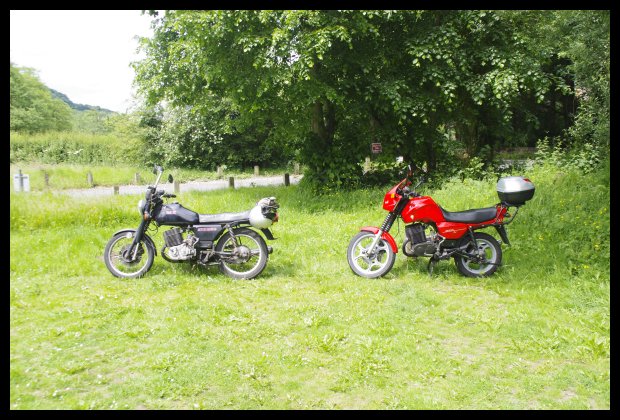 This is the year that the MZ had a well deserved makeover.  Stripped to the bare frame, everything was sent off for powder coating - the engine did not need any internal work doing, but I took the primary drive side off to check the clutch.  A new silencer was bought from Germany and it also grew a side stand. 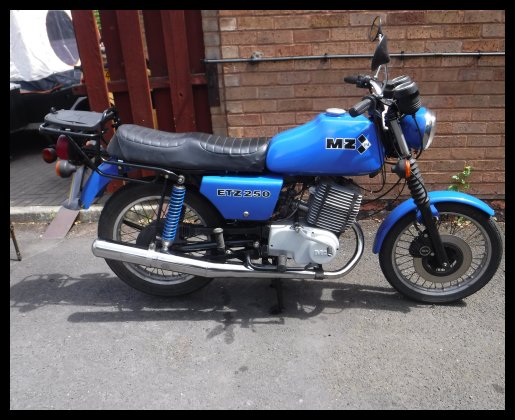 The MZ has had nothing done to it since its makeover last year - which is a good thing as far as I'm concerned.

Once again, the MZ has just got on with doing what an MZ does best - rolling along with no hassle.  Let's hope things stay that way, shall we ? 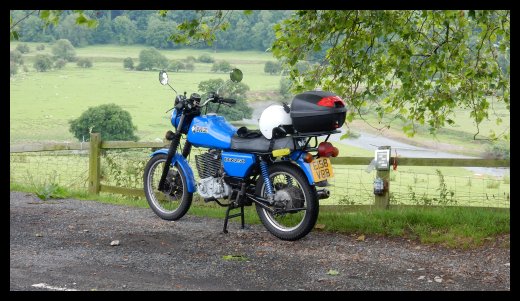 The MZ is still happily doing what MZs do the best.  OK, so I had to give the front brake caliper some new pads, pistons and seals - oh and a new voltage regulator.  The old one still worked, but it was a case of fitting something I already had. 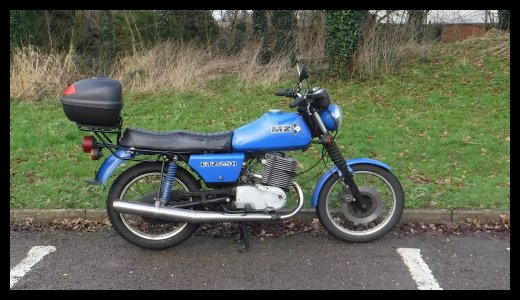