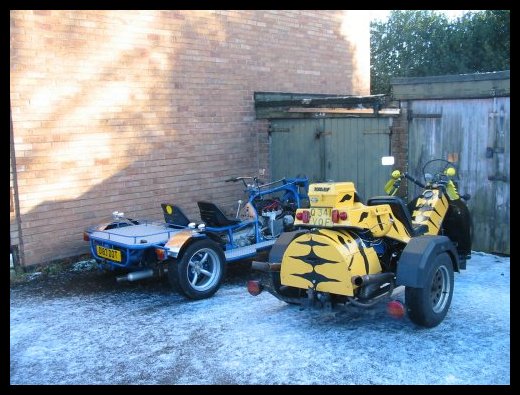 This fine machine came courtesy of eBay, and the adaptations officer for NABD, one "Billy Bigbeard".  November 2003 saw me driving up to Leek and bringing this machine back home.  It lived outside Nigel Fletcher's place until I made room for it back home.   Why is it called DOT ?   If I told you the last three letters of the registration number were DOT would it give you a clue ? 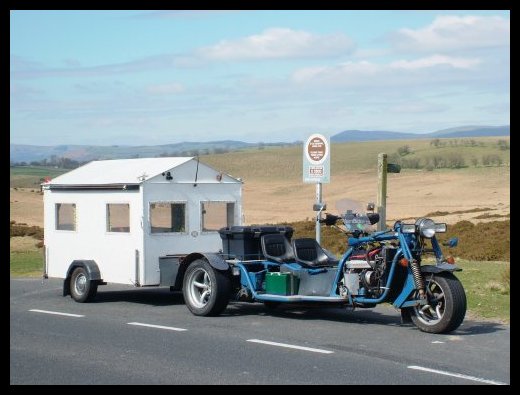 The one thing that this 2 litre, automatic trike is good for and that's towing - or at least it is now.  Back in 2004, I was coming back from the Gurt Gallybagger rally, travelling along the A303, just past Stonehenge.  I was following Pete Cain on his VW trike.  Now we didn't know at the time that Pete's trike had a blockage in the fuel filter - the moment he opened the throttle the trike would slow down and almost die.  This slow running up the hills caused the automatic transmission fluid in my trike to escape from the gearbox.  Oh what fun.  The very next job when I got home was to fit a massive oil cooler.  It seems to have done the trick. 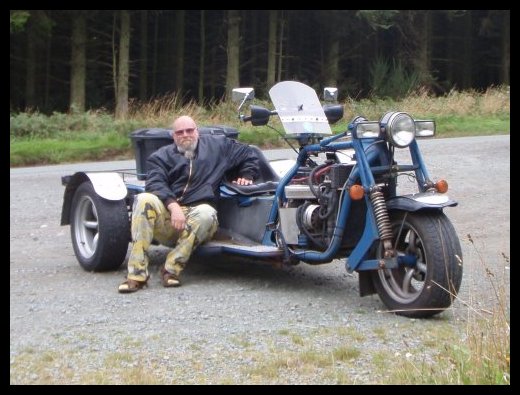 This was one of the last camping weekends before my accident.  Up by the Stiperstones.  All being well, DOT will be the first vehicle that I will be able to use once my leg starts to recover.  Being an automatic, I don't need the left foot seeing as there is no clutch pedal.  The seat may have to be raised in order for me to fit on board . . .  that is an ongoing project as of March 2010.  Well - on March 27th the seat was indeed raised by four inches, and moved back by about three inches.  This means I can now ride DOT.  OK, so I can only tolerate being sat on it for ten minutes or so, but it's a start. 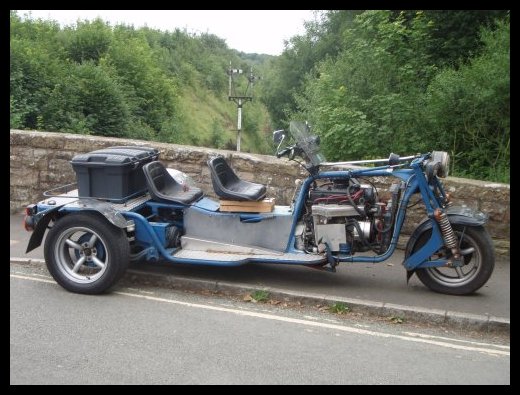 Here you can see the stylish seat modification - a couple of lumps of wood, a bit of all-thread, and the job's a good 'un.  Now I bet the MOT tester ain't going to look too favourably on a wooden seat base, so when MOT time came round I decided that as well as three new tyres, a new seat mounting would be in order.  The seat mounting bit was easy, but when it came to changing the front tyre things went a tad wrong.  The wheel spindle was seized solid.  Much time, trouble and expense later and all was well. 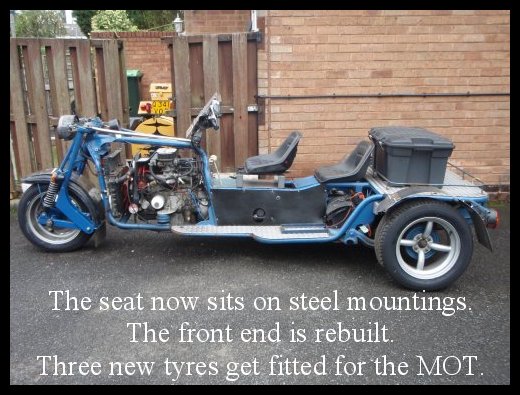 DOT has not been well this year.  That old problem of the transmission fluid overheating and escaping all over the exhaust reared its head again.  I took DOT to a specialist in automatic gearboxes and had a full service and set-up.  The fellow pointed out that the exhaust was running beneath the gearbox and could be causing it to overheat - I can see what he means.  Right, time for a new exhaust system - the original one was a bit of a bodge job to be fair, with a very tight, constrictive bend just after the down pipe exits the manifold.  The new one is currently under construction, I don't know if it will be finished before the end of the year.

DOT came home on the last day of February with a new stainless steel exhaust system.  Thanks have to go to Pete for doing most of the work on the exhaust.  I took DOT out on test and the first thing that became obvious was the baffles in the silencer weren't strong enough - nothing that Pete couldn't fix - and so far they've been well up to the job.

I did notice the brake pedal travelling further than normal, and sure enough one of the rear wheel brake cylinders was leaking.  I fitted new cylinders to both sides and bled the system - the brakes are now back up to scratch.

As regards the transmission fluid overheating and escaping - I fitted a couple of thermostatically operated fans to the oil cooler.  I then hitched up the Dog Kennel and deliberately worked DOT hard along the motorway to see what would happen.  Well as far as I could tell no transmission fluid escaped - on the down side though DOT was only returning 23.7 mpg.  At least I had a weekend down the 'Dashers out of it. 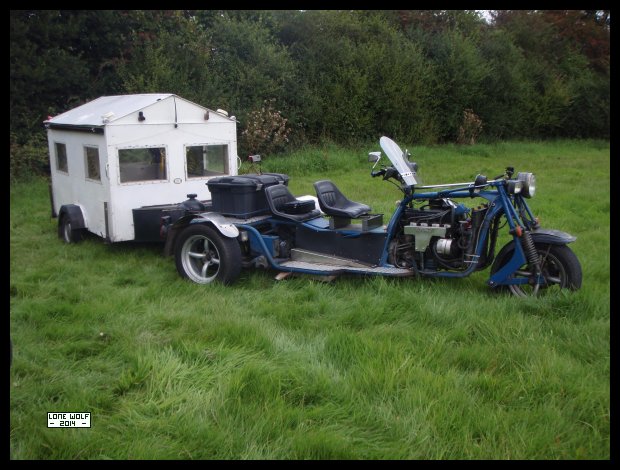 DOT and the Dog Kennel spend a night down the 'Dashers

The automatic gearbox was not operating correctly - it would not "lock up" in top gear and thus the torque converter was slipping.  This meant the ATF was getting too hot, the engine was revving too high and it was drinking petrol at an alarming rate.  It turned out the solenoid valve which operates the lock up clutch had never been connected since I've had the trike.  The valve was shorting internally and this was probably why it was disconnected in the first place.

Steve, at Steve's Autos replaced the solenoid valve and gave the gearbox a check over.  DOT now locks up in top gear and is using less petrol.  I've not yet tried towing for any great distance , but I hope the ATF will no longer get too hot. 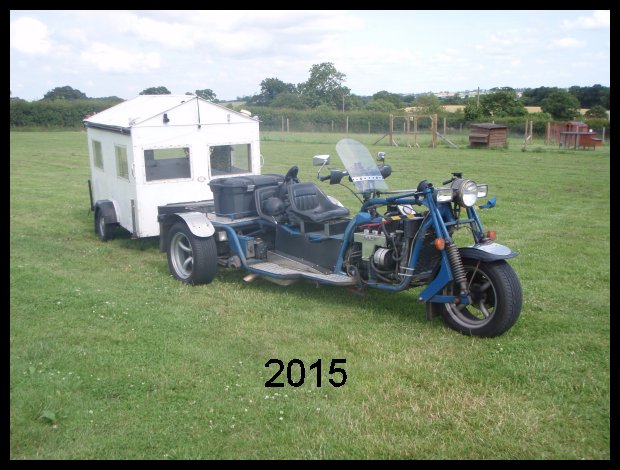 It was pointed out at the MOT that the shock bushes were worn, and the brake line could catch on the mudguard stays. 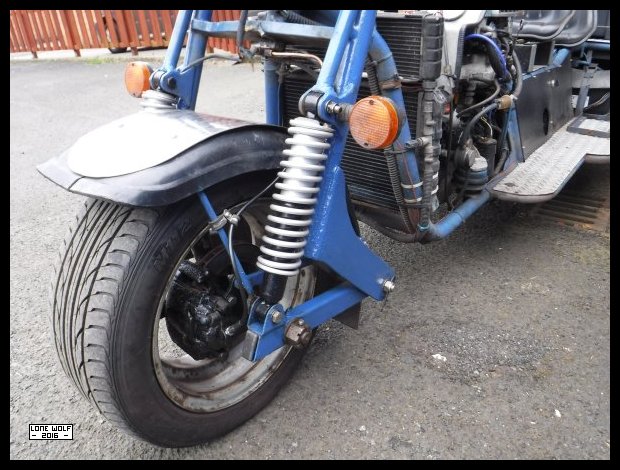 My radiator decided to spring a leak - so whilst the radiator was being repaired, I took advantage of the extra clearance and 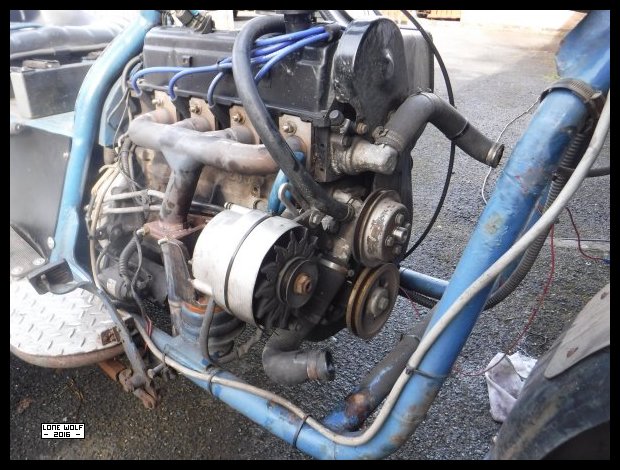 I made new radiator mountings too - and also gave the oil cooler fans a bit of a makeover. 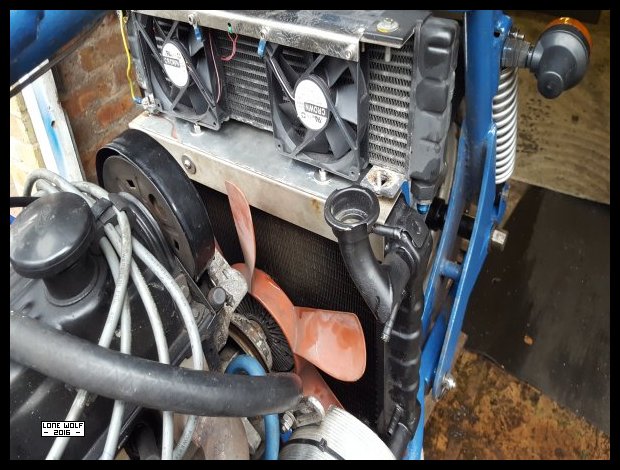 DOT had a new speedometer for Christmas - the original VDO one still worked but the odometer display had failed - so a new Smiths electronic clock was fitted. . . and it still hasn't reached a thousand miles yet this year.  Hopefully DOT will get a bit more use seeing as I've decided to keep ( and try to use a bit more ) the Dog Kennel.  In fact, DOT took me to the Grubs rally - the first time I've camped there since the accident. . . . it was then on to Founders Day - pictured below. 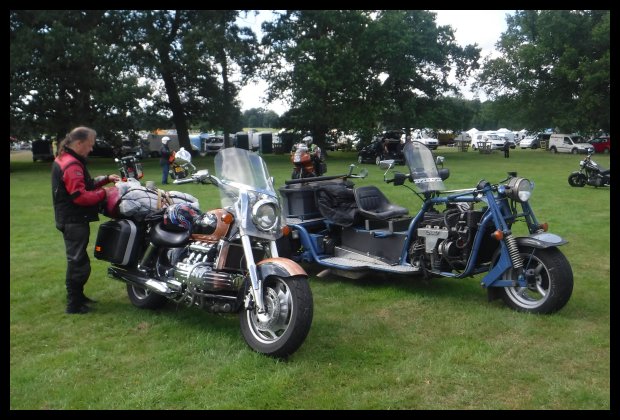 DOT has generally been getting on with life.  The front suspension springs were re-powder coated seeing as they were showing a bit of rust.   Whilst down in Cornwall I noticed the exhaust seemed a bit louder than usual . . . and it kept getting louder by the day.  As you can see, the bottom was blown out of the silencer box and the exhaust manifold had cracked almost in half.   You can also see a new alternator - coming back from the same Cornwall trip, the alternator failed coming into Barnstaple.  Luckily a local motor factor had one on the shelf, so that at least was an easy fix.  I welded up the manifold and fitted a full length stainless steel system when I got back home. 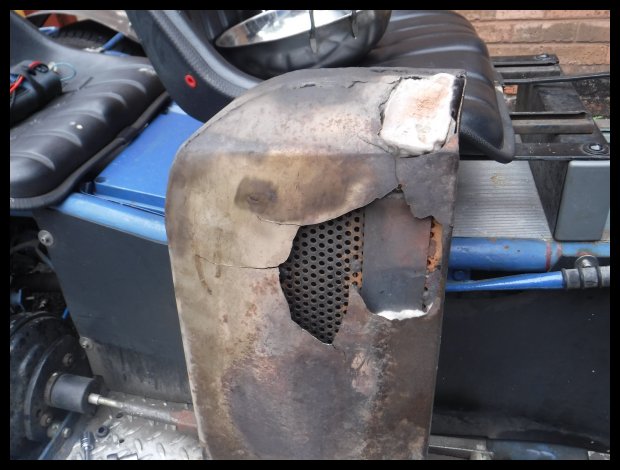 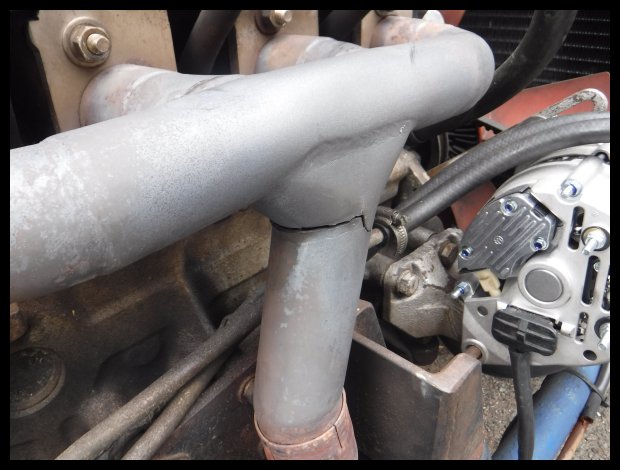 This year DOT had a nice long touring holiday, taking in Lindesfarne and quite a lot of the Scottish Highlands.  Towing the trailer tent didn't cause DOT any problems.  All in all, DOT covered just over 1600 trouble free miles . . . . however, when I got back home I needed to pop up the local cashpoint - on the way back the front wheel bearings on the left hand side collapsed.  I'm just glad this didn't happen whilst coming home down the M6.  Luckily it was a fairly quick fix and DOT is all happy again. 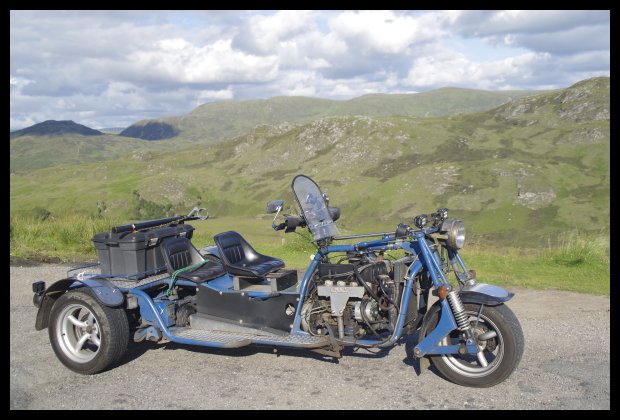 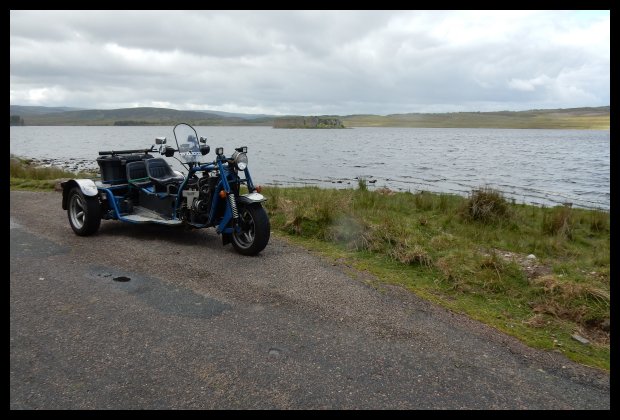 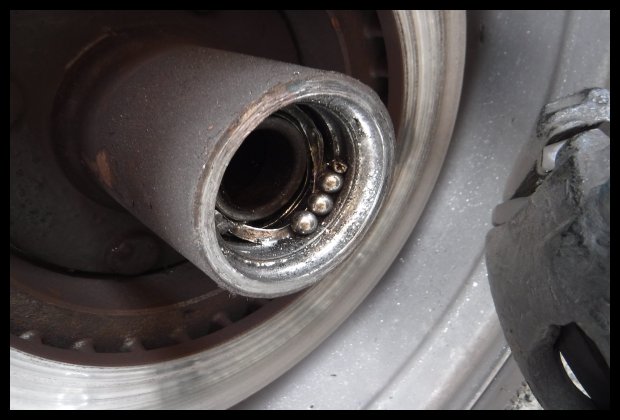 2020 was not the best year for DOT.  Only 633 miles covered as opposed to the 3533 miles covered in 2019.   Anyway, one little job that did get done was raising the rear mudguards so that the rear suspension could travel a few more inches.  There was only about two inches movement before the tyres hit the mudguards, and that was despite having two rubber "suspension spring assisters" fitted either side.  This was even more of a problem when towing the Dog Kennel. 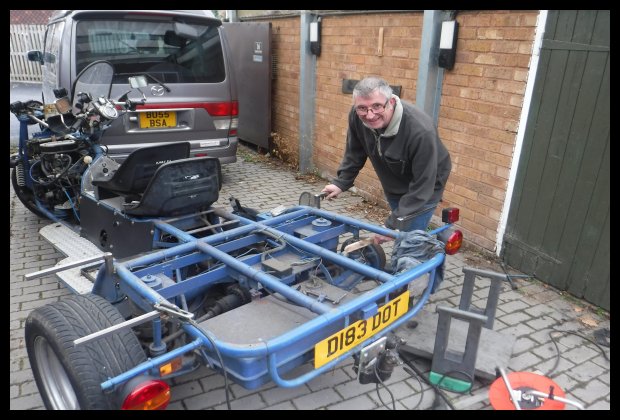 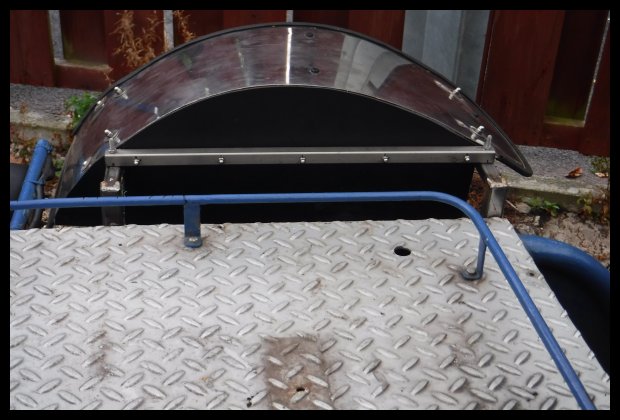 I'm sorry to say that DOT has hardly done any work this year.  I managed to take the Dog Kennel to one rally, and that's about as much as DOT did all year.  Oh, and I did have to buy a new battery whilst on the rally, but the original was over six years old - and it was only a cheap one at that. 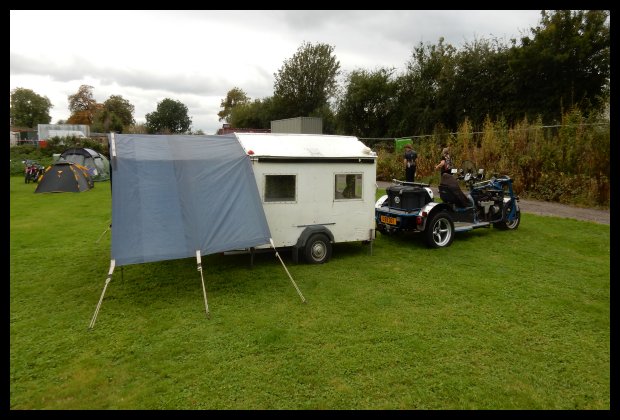