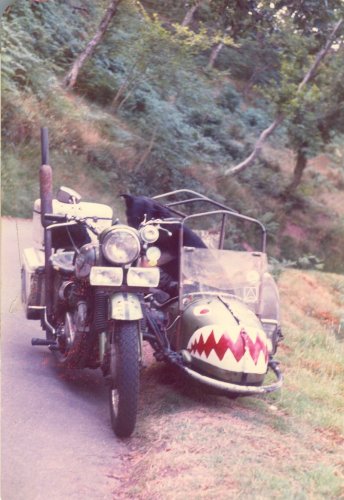 This is what the A7SS turned into - the infamous M21 rat bike.  By now the engine had been converted into coil ignition and a car alternator was being driven off the crank shaft, very similar to the conversion on the AJS chop.  Seeing as Ajay is in the chair, this must have been before March 1984.  If I recall correctly, it was down at Ilfracombe, where I was on holiday, along with Tony, Ian, Andy and Rob (Sep) .  Later on, I lent the outfit to a friend of mine, "Madkid" - he promptly crashed it through his neighbour's privet hedge.  This did unrepairable damage to the sidecar chassis, so Madkid did the decent thing and got me another one.  A couple of forty gallon polythene barrels and some old fur later and the "hairy outfit" was born. 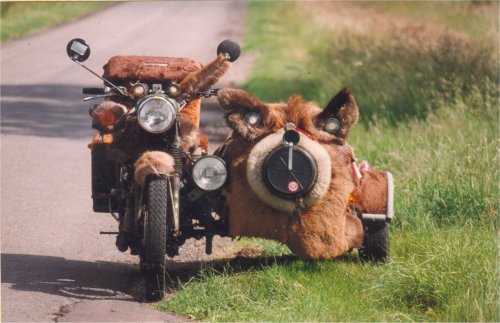 The hairy outfit was all well and good until it rained.  It got rather heavy, and the brakes on old BSAs ain't all that good to start with. . . . . .so why in the name of all that's decent did I go and make an even heavier outfit ?

The next one was the remains of the old hand powered passenger lift from an old folk's home in Tipton.  Well, it seemed a shame to throw it away. 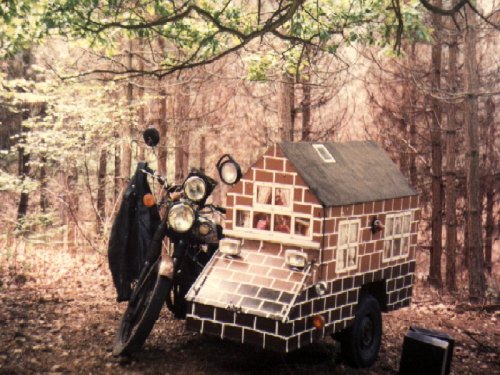 This happy outfit ran all over the country.  It was never very fast, but I usually got where I was going without too much bother.  It was only carelessness that killed the M21 in the end.  I'd put a new small end bush in, and having finished working on the bike for the day I just covered the open crankcase with a rag.  That night it rained and filled the crankcase with water, something I never noticed and continued to put the top end back together, which ain't a hard job on a side valve.  Coming back home that evening, a loud bang, followed by a nasty rattling, told me something unpleasant had happened.  The small end bush had seized solid and broke the con rod.  This happened in 1991 - I'd run this bike for a good few years and it didn't owe me anything.  After much thought I decided against rebuilding the engine and gave the bike away.  Pete Cain had the frame and logbook.  Gordon had the gearbox and petrol tank.  CX Dave had what was left of the engine.  As you can imagine, no one wanted the sidecar.