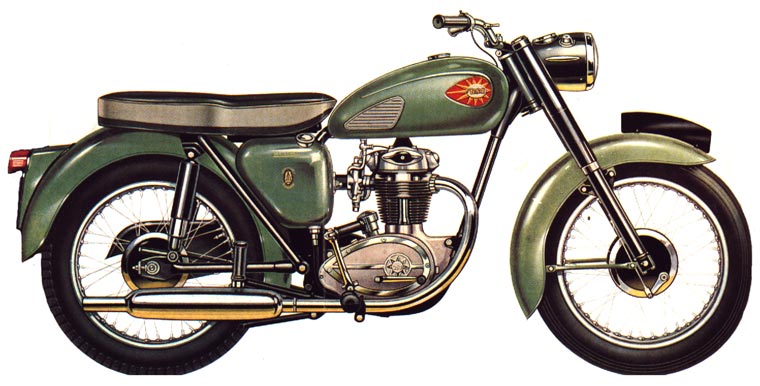 If only mine looked like that.  Word had it that a chap I knew had a C15 for sale.  Five pounds was the asking price, so I toddled off to his house to have a look.  All I could see was the handlebar end . . . . he'd buried it in the garden.  Why he'd done such a thing was a mystery.  A bit of haggling and it was decided that if he dug it up then I'd pay a fiver, but if I had to exhume it then the price would be two quid.  A bit of digging saved me three quid and I went home pushing a rather grubby looking C15 - or what was left of one.  The frame and forks were no good, so in a blinding flash of inspiration I fitted the engine into a plunger Bantam frame, the very frame that once housed the "Pandemonium".  Now a C15 engine is much heavier than a Bantam engine.  This coupled with a set of forks which had seen better days was a recipe for disaster.  I took off  from a small jump in the local quarry and executed a perfect landing.  The forks compressed, as they should.  The fork top nut came off and hit me square in the mouth.  Now it so happened that Ian had hit a car whilst riding his Gilera moped and this resulted in a very split and swollen lip.  For two weeks we both looked like a butcher's shop window.  This poor engine suffered all manner of indignities, including being run with no oil tank for weeks on end, and it never really complained.  In a moment of madness this bike even managed to set fire to the local railway embankment.  Sad to say, this is another bike that I just can't recall what happened to it.