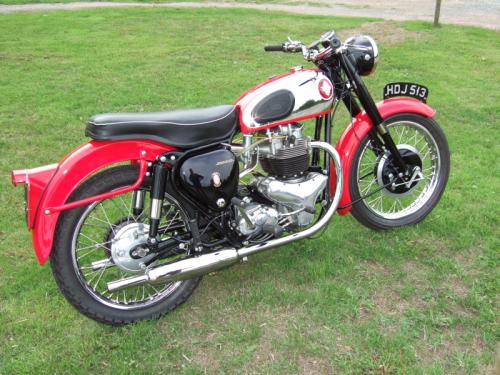 Once again, not my bike, but one similar.  Bought for the sum of £260 from Perrys in West Bromwich.  I did a phenomenal mileage in the first year or so of owning this bike.  I think it was this bike that started me off on touring.  It grew some luggage, and even had a handlebar fairing at one time.  I seem to recall spending most of my time either being down Ross on Wye, or up the Lake District.

On April Fool's day, 1978, I was riding down Woden Road South with Andy on the back when a car tried to pull a "U" turn from the left hand side of the road.  I hit the car full on.  The bike had only got 909 miles on the clock following a complete rebuild.  I took a flying lesson, but managed to land unharmed, the A10 however was a tad bent.  Andy also landed fairly undamaged.  The bike was just about ride able back home - the front wheel almost touching the engine.  A quick phone call to Saracen fork repairs, Hockley Hill, told me that it would cost all of £3 per leg to repair, but I had to get them in there at six the next morning because he was off fishing and would do them whilst I wait.  Vale-Onslow was the next port of call.  £6 for a front mudguard {Brand new - chrome - Rocket Three }, £5 for a headlight and a quid for the bulb.  By dinnertime I was back up and running, for a grand cost of £18.

Other strange things happened to the Super Rocket.  I broke a con rod going up the M6.  I had the barrels start rocking back and forth because the base nuts came loose.  The bike ended up being sold for the sum of £55 - yep - fifty five pounds.  I was out of work, I needed the money for another venture, which as it turned out paid very well.  I really didn't want to sell that bike, but sometimes you have to do things you'd rather not.