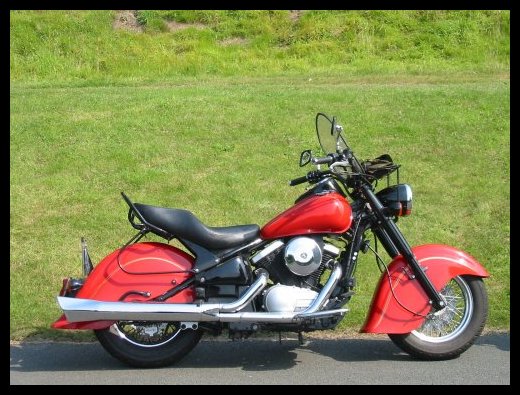 I quite liked the look of these when they were shown at the NEC in 1999, so when an ex-demonstrator model turned up at Cradley Kawasaki I couldn't help but pop in.  I popped in a few times, and each time the price had dropped.  A bit of haggling followed and I was soon the proud owner of the BRUB, or Big Red Ugly Bike, as it's now known. 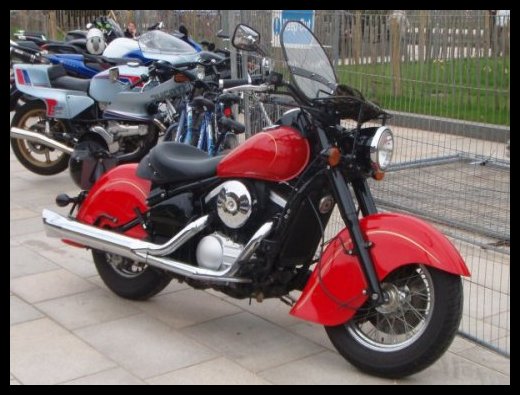 The only real drawback is the seating position.  As long as there is camping gear to lean back against it's fine, but as soon as you remove the back rest then your weight is placed on the base of your spine.  A single seat went some way to helping, but when that's fitted you have nowhere to carry camping gear.  Of course, you could always stay in a hotel - which is what we did in 2002 when the BRUB went to the Isle of Man. 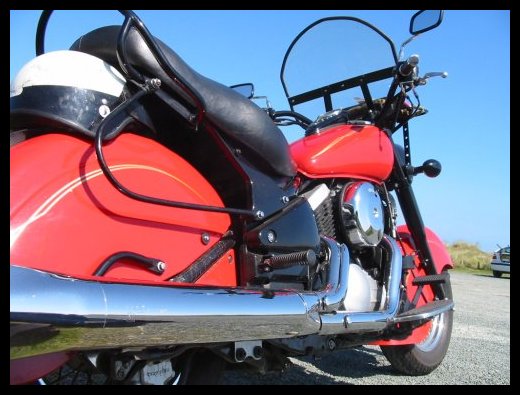 To be honest, this bike only gets used for events run by the "Doggies" - the UK Drifter group and the Vulcan owners Drifter group.  I may have to fit a hand gear change following my accident - my left foot does not work properly, and the Drifter is a left foot shift.  Time will tell. 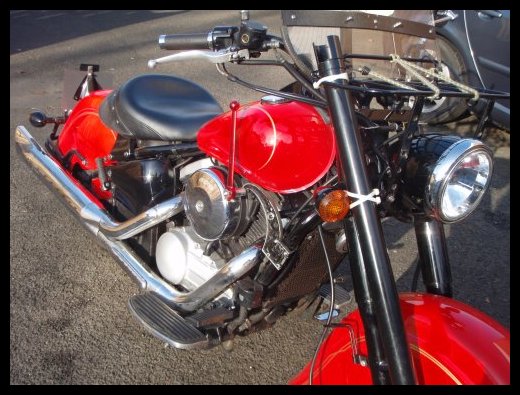 It's now March 1st, 2011 and the BRUB has now got a crutch carrier and a hand change fitted.  This wonderful device has been made from the remains of an ornamental cannon, a hydraulic shut off valve and a lift safe edge retracting rod.  I took the bike for MOT, and must confess it was one of the scariest rides I have ever undertaken.  Although only twelve miles it was most unnerving - there again, the more I ride the better I'll get.

Details of my big red knob

Here we are again - 2013.  I fitted the heel and toe gear lever assembly back to the BRUB.  I can now change up the box using my heel ( I just don't have the foot control to use my toes ) and come back down the box using the hand change.  In all fairness, the poor old BRUB has only been on two decent runs this year.

Once again the BRUB hasn't had the use it could have.  I went down to see the transporter bridge in Newport early in the year, and then in August I took a trip to the Murrayfield hospital up on the Wirral - and apart from a few local trips that's all the bike has done.

This year seems very much like the last - the BRUB just hasn't had the use it could have . . . .I'm afraid all those British bikes keep taking preference 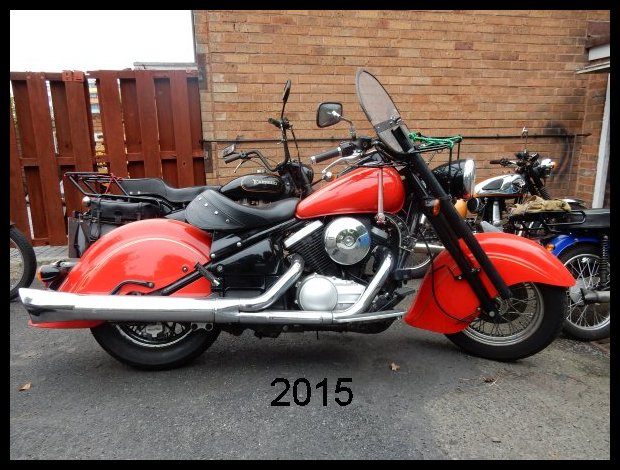 The Drifter took a ride over to the off road show at Telford - it seems I paid the price for riding on the salt encrusted roads in February. . .

. . . the rear brake pistons have since seized on. 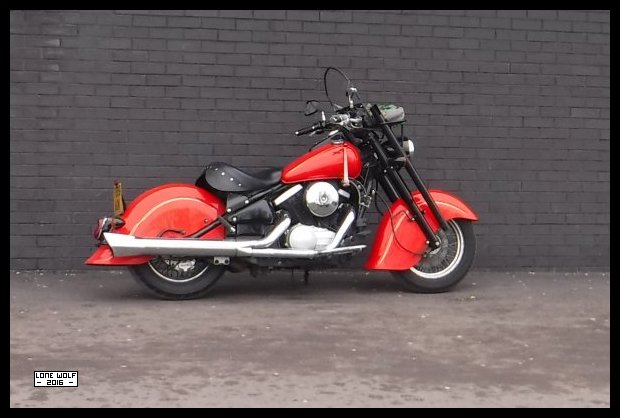 The rear brake was treated to some new pistons and seals . . . and the swingarm got a coat of paint too.

These are the perils of using  your bike in the Winter. 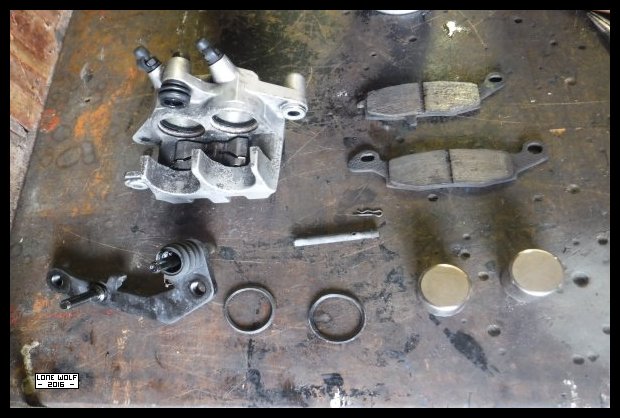 Well the Drifter has been sold.

Since the accident I can no longer put a tent up, let alone get in and out of one . . . and besides, I can't get on a bike which has camping gear

loaded on the back.  Now seeing as I mainly used the bike for rallies and such like, it meant that the Drifter hardly got used.

OK - so it was the first bike I could ride following the accident, being low and electric start it meant I could "learn to ride" again.

As much as I like the Drifter, I just can't justify owing a bike which gathers dust in the garage . . . so it had to go.

I seem to have bought the Drifter back.

Well to be honest, I did regret selling it and it was taking up room in the garage . . .  room that could be used for another bike . . .

but there isn't really anything on the market that I fancy.  Another factor is the knee on my "good" leg is starting to play up

so a bike with an electric start and a low seat height would be a wise move - plus I still have the hand change.

The best reason for buying it back has to be the fact that I wanted it back - now I have to try using it a bit more.

The first thing I did after getting the Drifter back home was to take it apart.  Well not completely apart, just enough to allow me to get the rusting bits powder coated and re-chromed.  I would have liked stainless steel wheel rims but the Drifter rim has 44 spokes which was not available in stainless . . so it was a case of getting the original rims powder coated satin black and having the wheels built with stainless steel spokes and nipples.  The front carrier and screen had been taken off the bike - now seeing as both the carrier and screen were made from scratch using bits and pieces from the garage, it wasn't a problem to remake them. 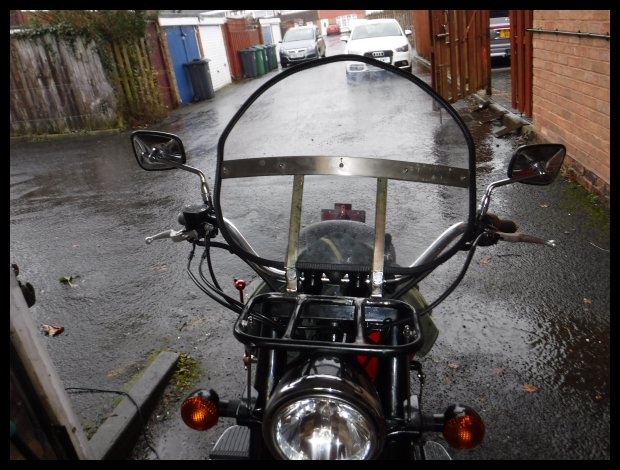 Having put the bike back together, I went to the show over at the Three Counties Showground, near Malvern.  I was quite surprised when the Drifter won "Best bike from the 90's".  There again, it was the only bike from the 90's, so maybe it wasn't such a surprise after all.    I've even managed to use BRUB a bit more - a nice weekend up in the Lake District with a few fellow Drifter riders, not to mention a few Sunday rides . . . usually ending up at the cafe, but that's hardly a surprise. 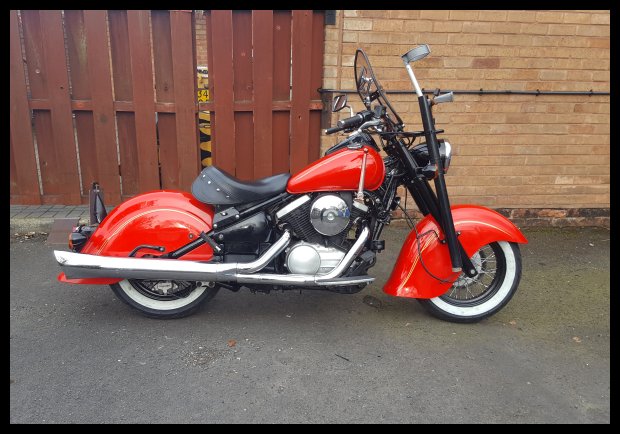 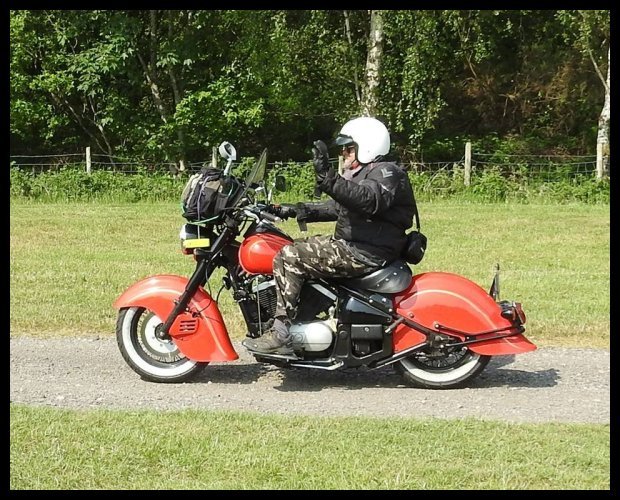 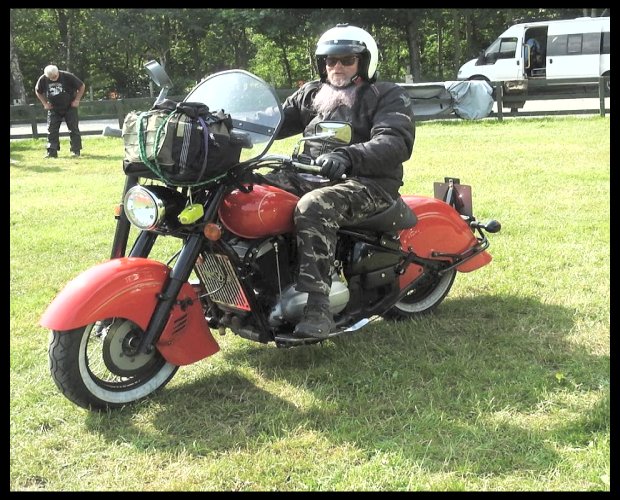 Well so much for saying I will use the Drifter a bit more - I've only been out on it three times so far this year.  One of the outing was to the "Malvern Festival of Transport" where the Drifter managed to win a "Pride of ownership" trophy.  So it's official - I'm the proud owner of a Drifter, which in all reality, sounds about right. 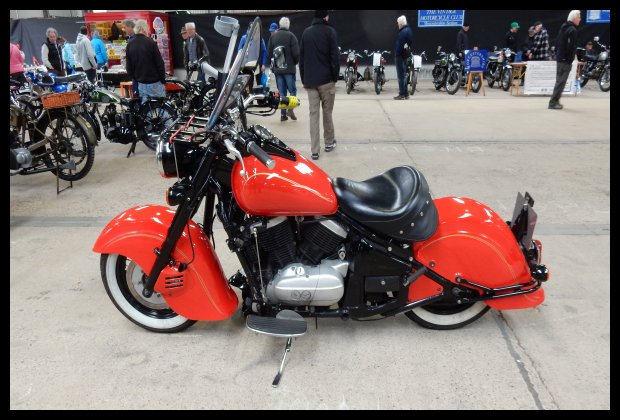 Well as you know, most of this year was lost due to the dreaded plague.  I did manage a few days out on the Drifter, which has really had nothing done to it apart from put petrol in and ride it.  Let's hope next year will be a bit better as regarding going out and about. 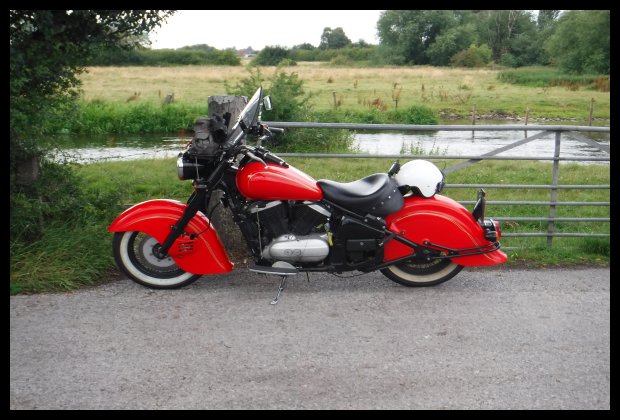 The Drifter has gone out a few time over the last twelve months, but hasn't really been "used", for want of a better word.  I had a couple of runs to the coast, headed for the summit of Clee Hill, and even encountered a Polar Bear, so I suppose it hasn't been a total waste of time. 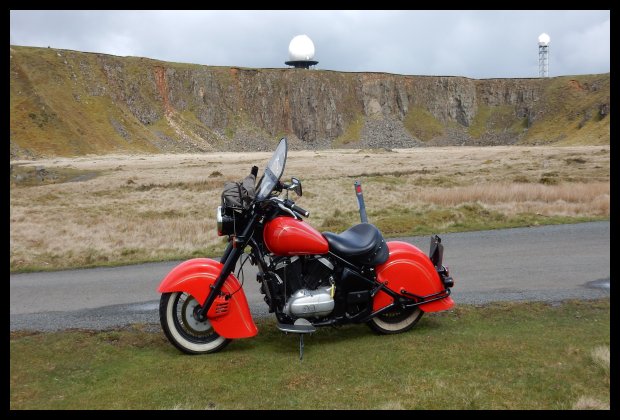 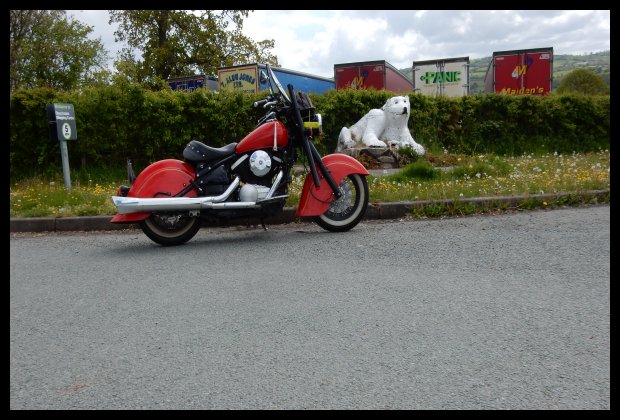