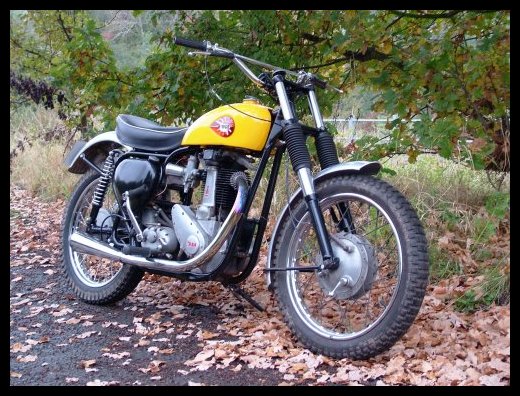 Whilst at the Stafford show, on October 21st, 2007, I spotted an alternator B31.  The price seemed fair, and the bike just looked about right.  No problem to add lights and such like, so I promptly bought it. 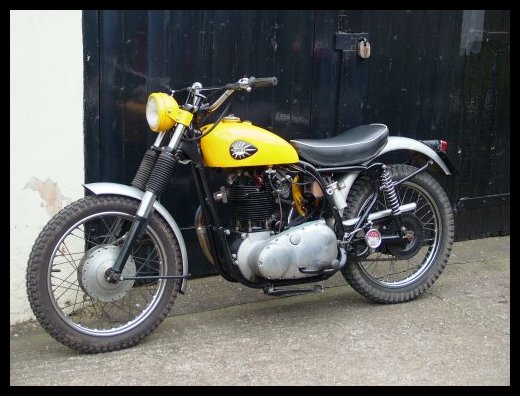 A set of lights later - which in turn warranted a new alternator, and the "30 bobber" ( 'cos it's only worth 30 bob ) as it had been christened was all set to hit the road. 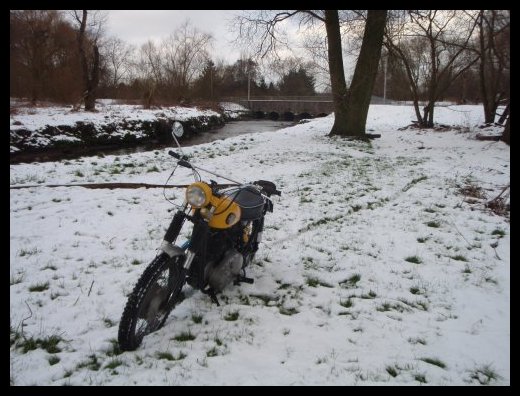 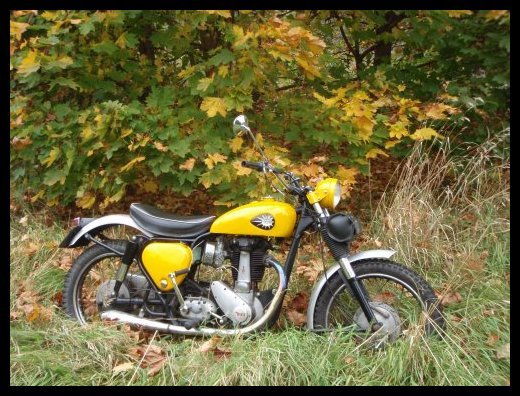 Ok, so there was a little issue with the bike smoking when leaning on the side stand, but I can live with that.  Here we are down by the river, October 2009.  If only the bike and myself knew what was about to happen . . . . . . 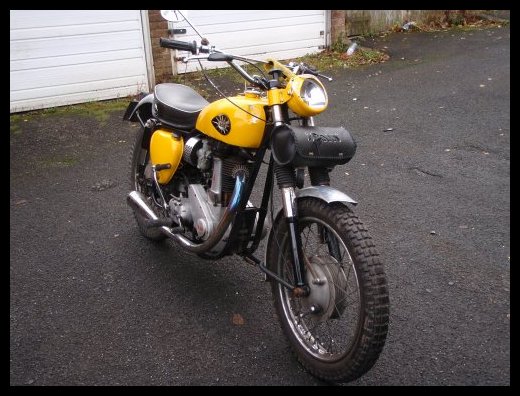 This is the 30 bobber as of March 2010.  As you can see it appears a little damaged.  The damaged to the bike was nothing compared to the damage to myself.  I now have enough Titanium in my pelvis to build a bike frame - I have a skin graft from my thigh to my shin, and my left foot doesn't work as it should. I still can't walk, or sit upright.  All this because some car driver didn't look before making a turn.  Be careful out there, they really are out to get you.

I'll update this page as both the bike and myself get fixed . . . my money is on the bike getting better first.

Right, here we are, the beginning of March, 2012 and I've started getting the bits together for repairing the 30 bobber.  The main cost was the petrol tank.  Despite searching high and low I've been unable to find a two gallon "Catalina" tank with pear shaped badges.  I've had to go for the "Gold Star" tank with four inch circular badges.  I've decided to buy a toolbox for the left hand side, so that it matches the oil tank on the right.  I've got most of the bits for the front forks - the one stanchion was slightly bent.  The only other component which was destroyed was the headlight - luckily that was something I already had in the garage.  The other damaged parts - mudguards, shocks and seat can be replaced as I go along.  So far, it's looking like the bike will be up and running before I am.

Almost three years to the day . . . and like I said, the bike is now better than it was before the accident . . .whereas I ain't.  As you can see, the colour has changed and the bike has grown a set of indicators.  I didn't bother with renewing the mudguards - the money saved on those went towards the indicators and the cost of the powder coating. 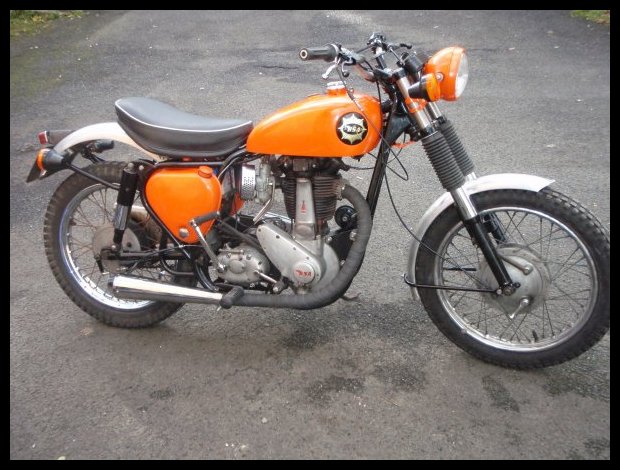 I think this is the bike that had the most use this year.  Although it ain't exactly the fastest thing in the world, it rolls along nicely.  The performance was decidedly down earlier in the year, in fact the bike would not exceed 52 mph no matter where the throttle was.  Try to go any quicker and a rather nasty noise appeared somewhere in the region of the cylinder head. 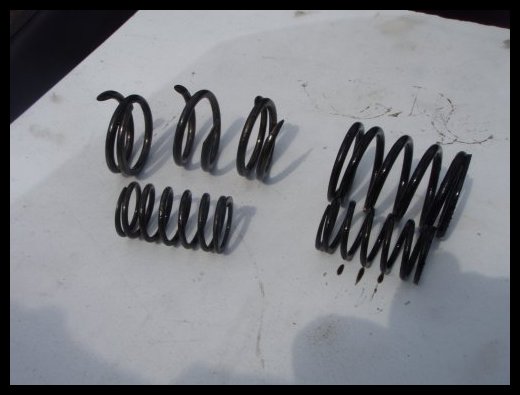 As you can see above, one of the exhaust valve springs had decided to break.  Luckily the smaller spring held and the valve didn't drop into the cylinder.  Nothing that a few quid didn't fix.

Due to me getting my new hip fitted in January, the B31 wasn't started for three months - when I did fire it up ( first kick, as it always does ) the ensuing smoke screen was causing birds to fall dead from the skies - well almost.  Now seeing as my B33 is fitted with one of these wonderful anti wet sumping valves, I thought I'd spend a few quid and fit one to the B31.  Now it doesn't matter how long I leave the bike standing for it does not fill the crankcase with engine oil. . . . .and that's really just about all I've done to this bike apart from put petrol in it and ride it.

The B31 has been out and about quite a bit this year.  It tends to be the bike I use when I ain't in any particular hurry.  All in all, I do enjoy riding this machine. 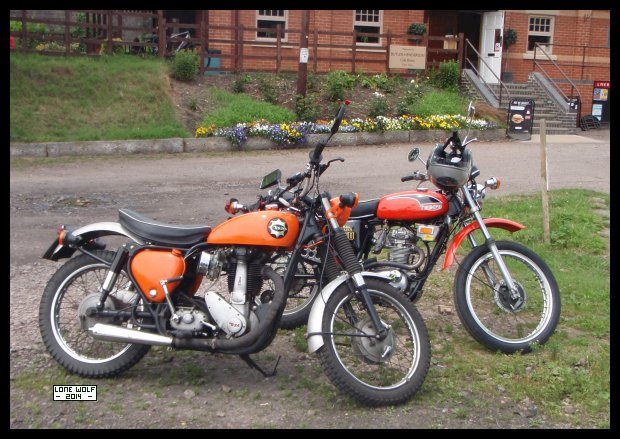 Now whilst returning from a run over Leicestershire way, I noticed the B31 was making a slight knocking noise.  I didn't think it was anything too dramatic - at the worst I reckoned it was the small end bush worn.  Oh dear - how wrong was I ?   I pulled the top end off the engine only to find the big end assembly had gone.  Like the D14/4S rebuild, the repair work on the B31 has had to be put to one side awaiting the funds to complete the job. . . . just another one of the many ways this injury has prevented me living life the way I would like to.

The B31 bottom end was rebuilt with the roller assembly from a Yamaha 660 single - the barrel was bored out to take a Triumph Bonneville piston.  The knobbly tyres have been replaced with a pair of Dunlop road tyres . . .and the B31 is now rolling along as happily as it has ever done. 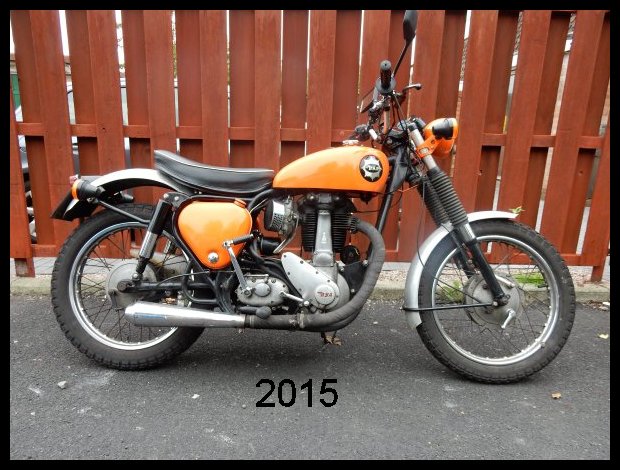 Well the B31 has just been getting on with what it does best - rolling along at a steady pace and taking in the scenery. Reliability-wise, I've had no problems at all, which is fine by me. 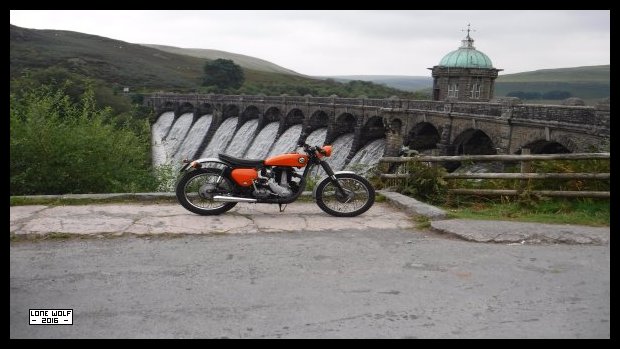 The B31 had a bit of a problem with the swing arm spindle moving in the frame - then to add insult to injury, it also snapped the chain . . . and before all this, the battery went toes up.  All this was soon sorted out, and the bike is now all happy once more. 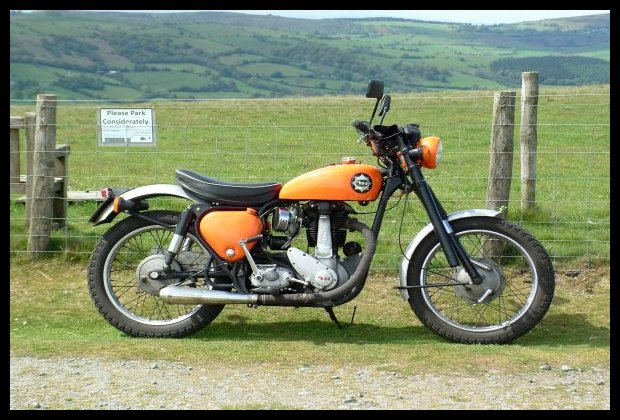 This year saw the B31 just generally getting on with what it does best - rolling along and making single cylinder noises.   The powder coating on the tank started coming off, so that was treated to a shiny new coat of, errr, powder.  Just for good measure it also grew a few black spots - oh, and some new foot rest rubbers.  Will this expense never end ? 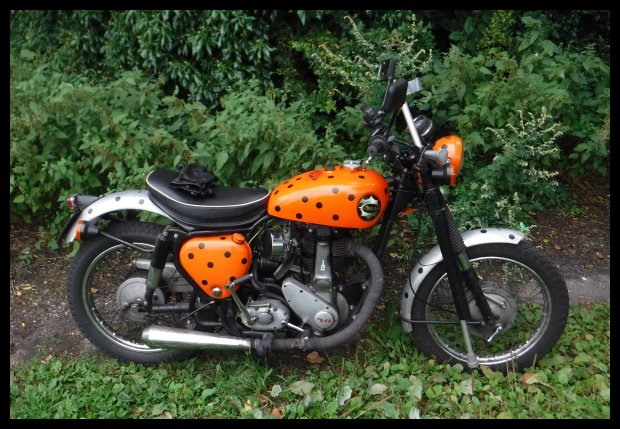 The B31 has just done what it does best - rolling along and taking no notice.  It's been to the seaside - it's been used on holiday - and it seems to have been the "go to" bike when heading to the cafe, or for a ride around the Severn Valley.  When all's said and done, I do like taking things easy and riding this machine. 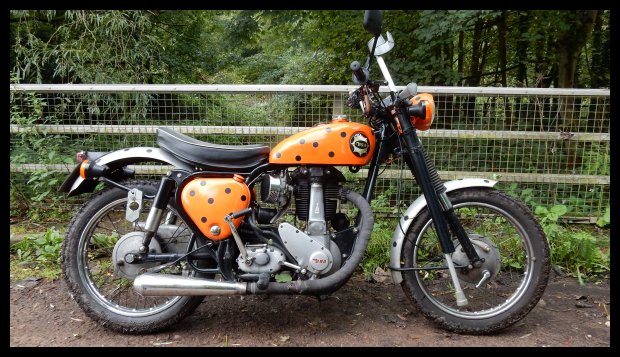 There's only been a couple of minor niggles with the B31 so far this  year.  No.1 was the left hand "hockey stick" mudguard mounting bracket breaking.  Nothing that ten minutes with the welder couldn't put right.  Niggle No.2 was a pinhole in the petrol tank.  This caused a "blood blister" to appear.  I decided to get the tank stripped, re-powder coated and then treated with POR15 sealant.  Luckily I was doing the Bantam tank at the same time, so that saved a bit of money as far as the sealant was concerned. 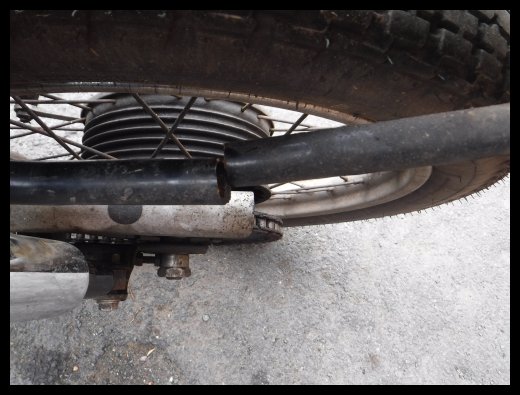 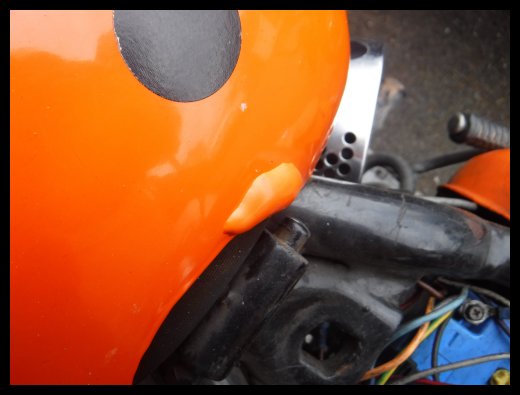 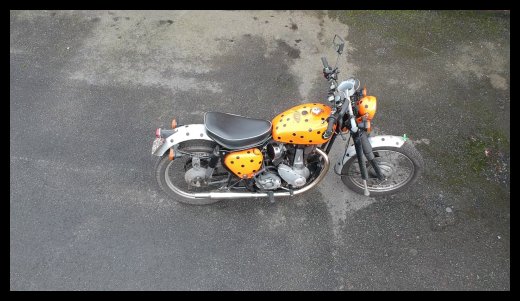 Seeing as the Goldie had a new rear wheel, I thought the best thing to do with the one that came out was to fit it on the B31.  This gives me a stainless steel rim and spokes and also a disc brake.  This went well until I took a closer look at the wheel.  Oh dear, the rim has split on quite a few spoke holes.  In the end I built my original B33 stainless rim onto the B31 hub, and all was happy once more. 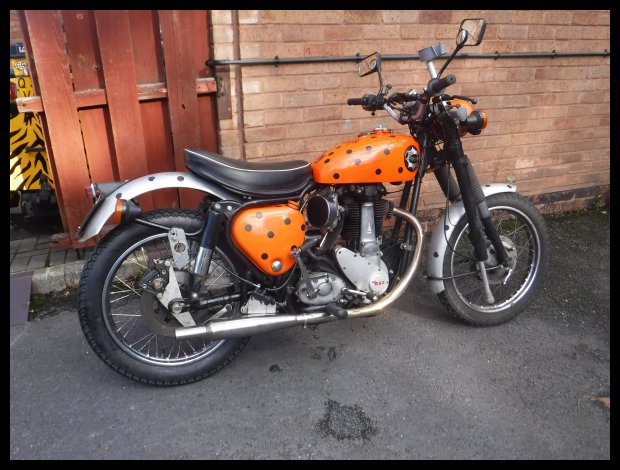 The B31 has also had a few holidays down by the seaside, not to mention quite a few rides over to the café on a Sunday.  When I fitted the LED headlight to the Bantam, I was quite impressed with it, so I treated the B31 to the same headlight unit and a pair of LED spotlights too.  Night time riding is so much easier when you can see where you're going. 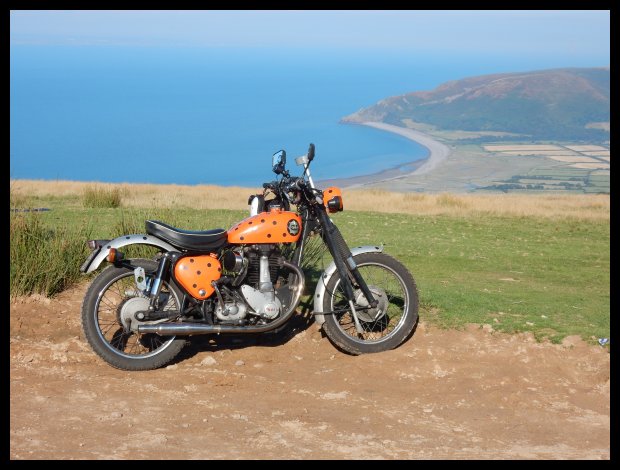 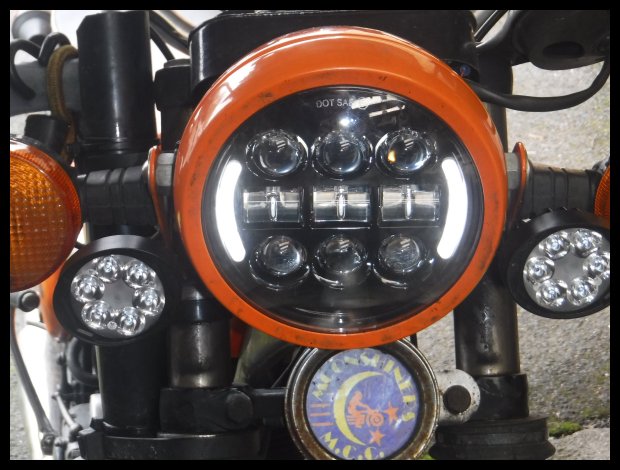